Well – the Autumnal Equinox is actually tomorrow… but close enough. The season has changed… The weather started fluctuating between cool and hot a few weeks ago, but, this week, the warm spell following the cool weather was in the seventies, not the nineties. We called this weather cool a month ago – now, we think of it as warm. It’s Fall…

Fall in New York City is wonderful. The air is crisp and clear, the sky turns a remarkably deep blue, with little wispy clouds drifting (or racing, often) through the air. The sun is warm and the air is cool, and it’s perfect walking weather.

And it is the height of the harvest season. I’m still inundated with eggplant and tomatoes – but the winter squash is starting to come in, and cabbage, broccoli, and glorious crisp apples… And we start to be in the mood for a less summery meal.

The other day, I cooked a sweet and sour red cabbage, and added shredded pork. Served it with mashed potatoes, and it was just right for a cool evening! And it is another variation of the basic Sauteed Vegetables.

Since I was using pork anyhow, I decided to use bacon to saute the onion. I don’t eat it alone very much, but I do like to use a little in cooking, sometimes – it can add a lot to a simple meal. I am able to buy “bacon ends” which is fine for me, as I’m not looking for the strips anyway. I loosen them up, and freeze the whole package – then cut off just what I need. I can easily cut it with a sharp, fairly heavy knife. Then I dice it small, and put the dice in a heavy pan over low heat so the fat will render out, and I get crisp bacon bits. (This means… the fat gradually melts, so you have liquid fat, and crisp bits. Use a low heat so it doesn’t burn.) You can drain off some of the fat, if there is too much – I just use a small amount to begin with, and keep it, since I’m after the flavor. If you would rather not use bacon, just heat some olive oil. 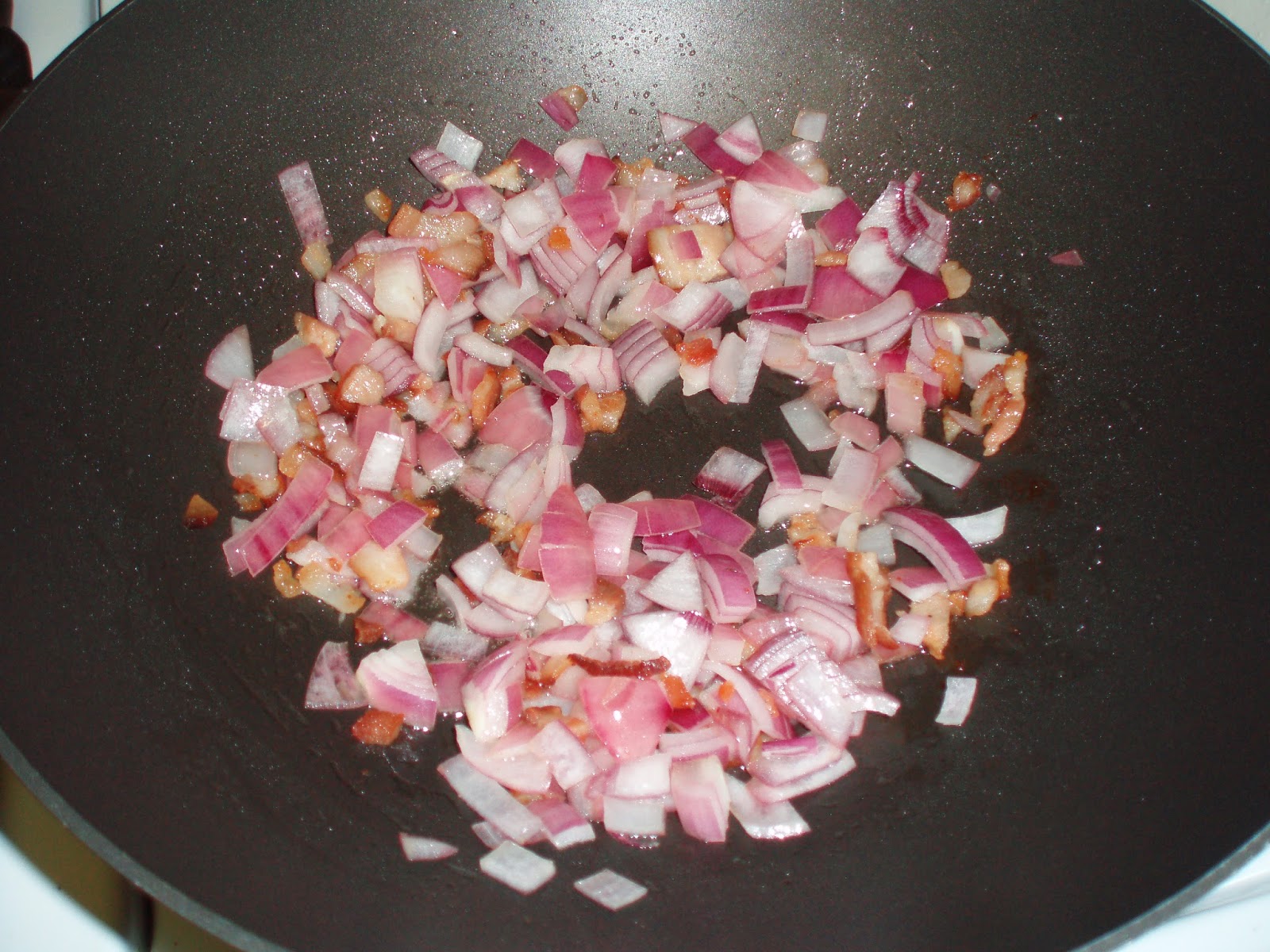 Then I chopped a red onion, and added it to the bacon and grease. I used red largely because I had it… but also because it’s a bit sweeter, and I was going for the sweet and sour taste. And, of course, the red onion is pretty with the red cabbage. I stirred it around every so often, as the onion started to soften.

I don’t seem to have taken a picture of chopping the cabbage… this cooking and picture taking at the same time means I sometimes get distracted… A whole cabbage is almost always much more than I want to cook at once, for two people – so I cut off a big chunk from one end, and work with that. The rest goes back in the crisper – when I next want it, I cut a paper thin layer off the cut edge, discard it, and the rest is good to go. Meanwhile, I place my chunk on the cutting board, and slice it, so the cabbage falls in shreds. If I get to the core, I cut it out, and discard it. I may then cut the shreds in half, to make them easier to eat. 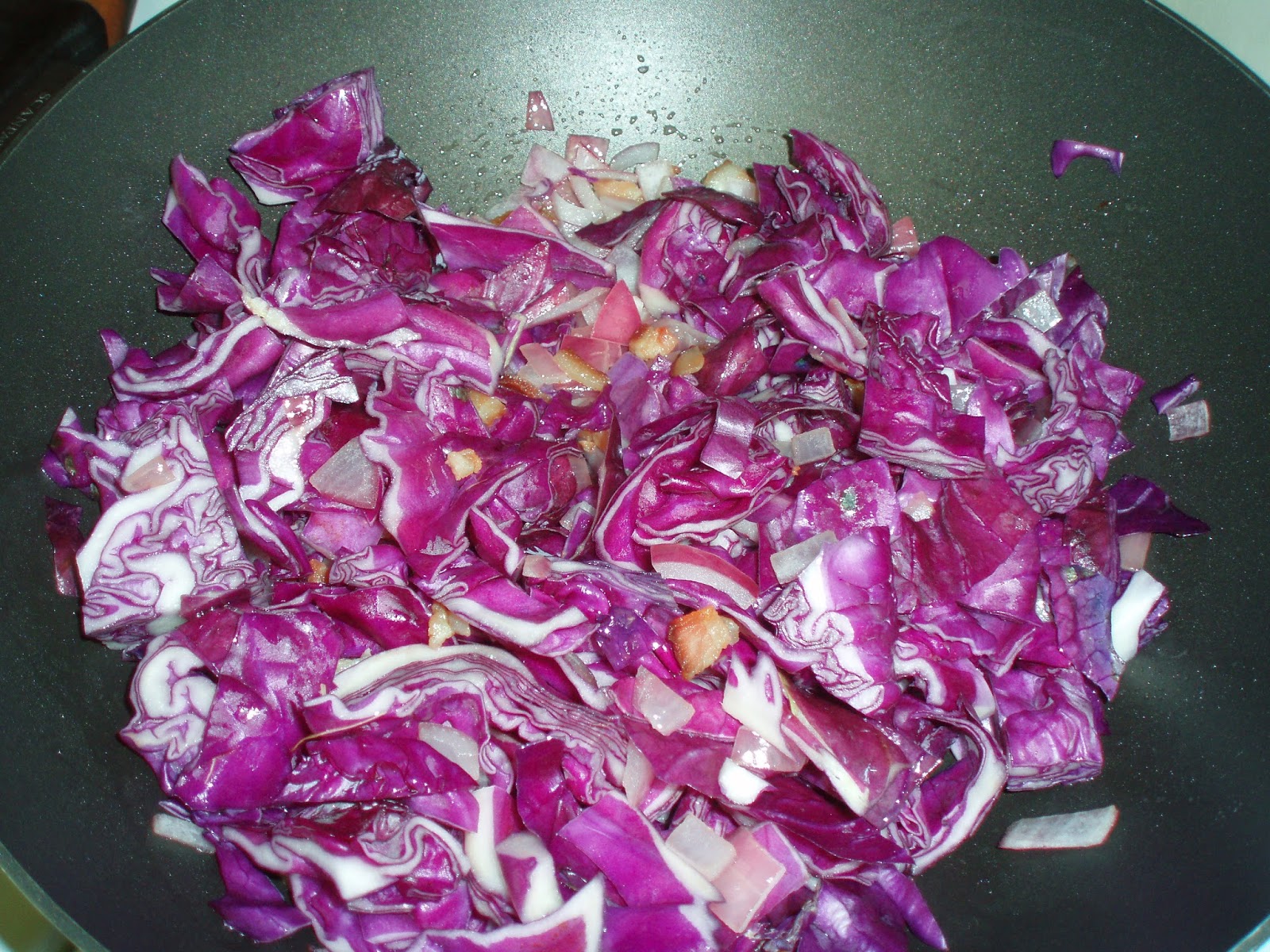 I put the cabbage shreds in the pan, with the bacon and onion, and stirred it around a lot to distribute the bacon grease over as much of the cabbage as possible. I let it wilt a few minutes, then added just a splash of apple cider vinegar, for the Sour. Then I cored and chopped one of the lovely new apples (I left the skin on, but discarded core and seeds) and added it, for the Sweet. (Rich wandered into the kitchen, and said “You know, an apple would be really good in…  oh … that’s an apple core, isn’t it?” Two great minds in the same rut, as my father used to say…)

I covered the pan, to hold in the steam and speed up the initial cooking, then checked it after about 5 minutes. 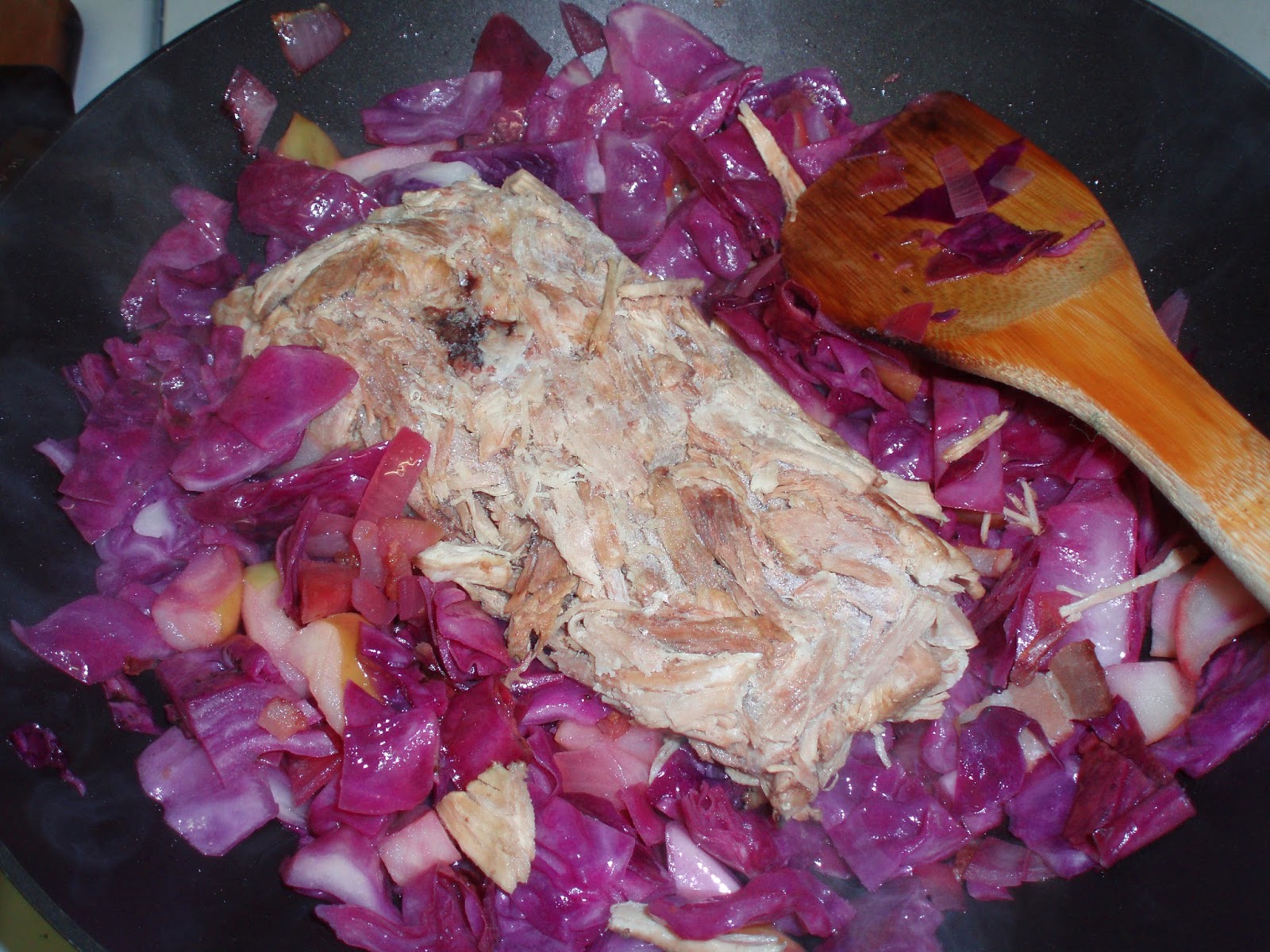 Usually I would just cook and serve this as is, as an accompaniment to pork chops or something. In this case, I had some pork left from a pork shoulder I’d cooked. I decided that, instead of just heating and serving it plain, or trying to figure out some way to season it, I’d just throw it in the cabbage mixture. This is, of course, purely optional – but it made this meal simpler. I just put the frozen block down in the fridge a few hours earlier, and then dropped it into the cabbage. I covered the pan again, briefly, until the meat thawed (I wouldn’t have, if it hadn’t been still partially frozen) and stirred it in. I then let it cook until cooked to our taste.

I served it with mashed potatoes – which I’ll talk about another time – but plain boiled ones would have been great. If I’d felt really energetic, potato pancakes would have been delicious – I might do that for guests, or a special occasion meal. Pork roast, probably, in that case, the cabbage, and potato pancakes… very fancy in a Good Home Cooking way…

Put finely diced bacon in a heavy pan over low heat, and cook until the fat renders out and the bacon starts to crisp. (Or, if you aren’t using bacon, just heat some olive oil in the pan.) Add the onion, stir, and let cook until onion starts to soften.

Add the cabbage. Stir it around thoroughly, to coat it with the fat, and let it start to wilt slightly. Add the vinegar and the apple, stir, and cover. Remove the lid after about five minutes, then stir and cook until done to your taste.

If you wish to add the meat, do so after removing the lid. Stir in, and heat through.