Preserving – and Using – Leeks (and other aromatics) Conveniently

This was a difficult week for me. A huge cold front came through, which is always hard on my body – especially my head. (Major, major migraine trigger.) So I didn’t write my blog.

We were still eating, mind you, and I was still cooking (since we had to eat) and we were still getting large amounts of produce from the CSA, and I was still dealing with that, and I even cooked publicly! (I sometimes demonstrate cookware or kitchen appliances professionally, and I had a gig.) I just wasn’t writing about any of it…

So, I’ll do a quick list, here, of some of the things I did with vegetables – and discuss leeks further. 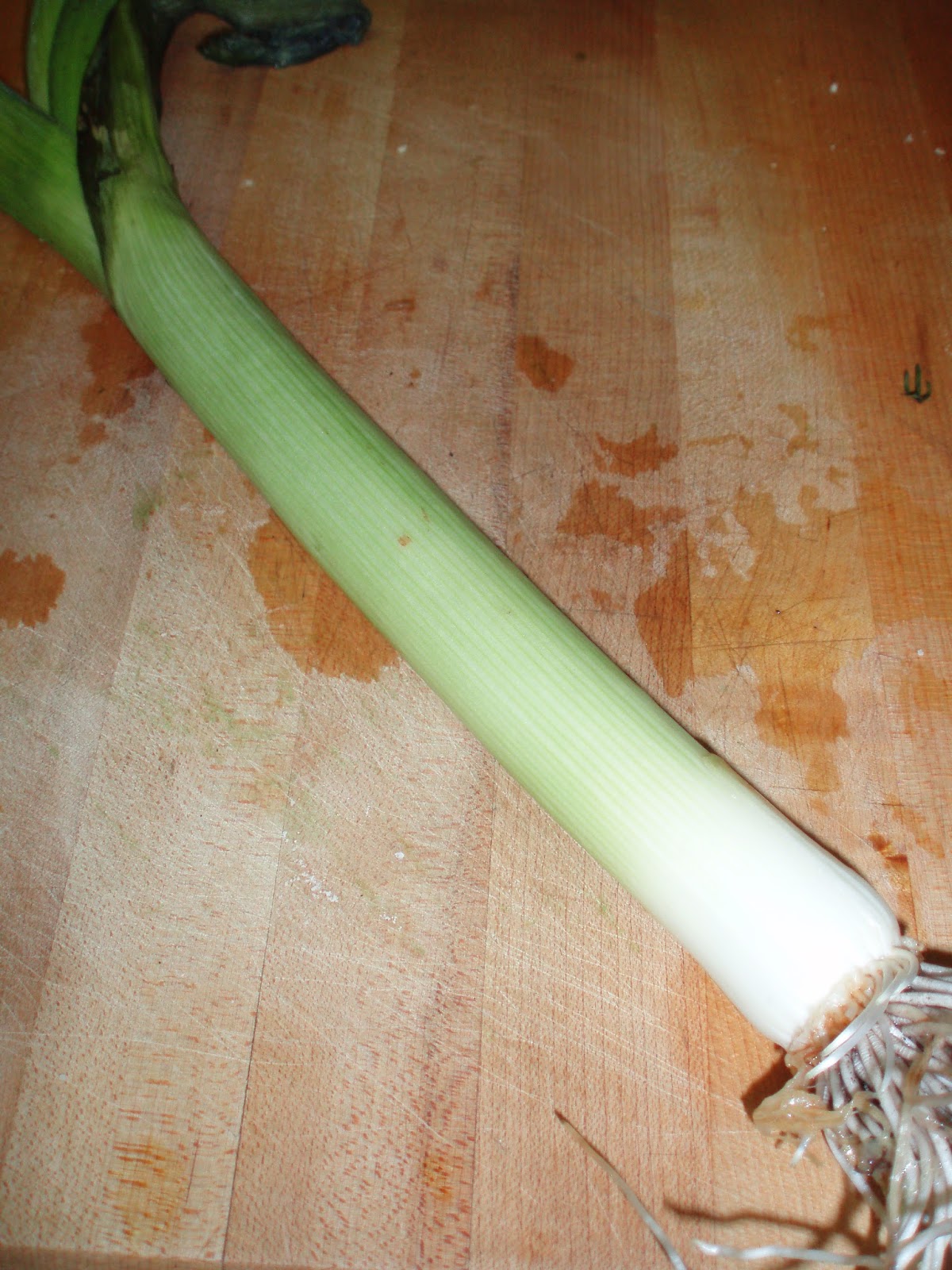 Starting with the leeks. I did mention this when I grilled a leek with the eggplant and other vegetables. Farmers growing leeks pile sand around them, in hills, to get the long white part, as any parts exposed to the sun are green – and tougher. This means that leeks are very sandy… and a bit of a nuisance to clean. Leeks are also often quite large, and you usually buy them in bunches, and one leek is usually more than I want for just two of us. All this makes it a perfect choice for a preprep – cleaning three is no more fussy than cleaning one, I get it all over with, and I can use just the amount I want.

First, you trim the leek. Cut off the tougher green leaves. Exactly where you cut is up to you – most directions tell you to discard all the green, but I find I can use all of the light green part and sometimes several inches of the leaves before it gets too tough. (The leaves are great for soup stock, by the way…) Also cut off the root end. (Just discard that.)

Cut the leek lengthwise. This gets you in all the little crevices that sand has gathered in. Then, slice the two halves across, in half inch or so pieces. Put them in a bowl or sink of water, and swish them around like crazy, using your fingers to separate the rings. The vegetable floats, and the sand sinks, making it easy to lift out the leeks into a strainer.

I usually wash the whole bunch like this, then let them drain and dry. Then I use a large fry pan or saute pan to saute them in olive oil until they are soft. (If there is a lot, or my pan isn’t big enough, I do them in a couple of batches.)  I then use some that day – but set the rest aside to cool, and freeze them in freezer bags,. I find the bags work best, as I can break off the amount I need.

Another vegetable I preprepped this week (but didn’t get pictures of) was celery. When I first got celery from the farmer’s market, I was disappointed. I was used to big bland ribs that mostly contributed crunch in a salad, or filled with peanut butter. These had too much taste! Then I realized – they’re *supposed to*… There’s a reason celery is used as an aromatic in mirepoix or in Cajun cooking…

So now, when I get a bunch from the farmer, I cut off the end, keep the tender center for celery sticks and salad and all – but chop and saute the big ribs. Again, I do it all at once – we just don’t use enough celery in a week to finish it while it’s fresh, but we like having the addition to our meals for the next month or more. Again, I saute a pan full at a time, and freeze it, and break pieces off when I need them.

When I didn’t have energy, I pulled containers from the freezer with cooked ground meat or shredded cooked pork. I put precooked onion and celery, and frozen peppers, in a pan, heated them, cut up a zucchini or something equally easy, and sauteed it. Then I added the cooked meat, perhaps a tomato, heated it through, and called it dinner…

So, even on the days I felt horrible, I ate reasonably well. When I did have energy, I used small amounts of time to get ahead a step,  so that when I didn’t have energy,  I had options. And we always had a nice meal.