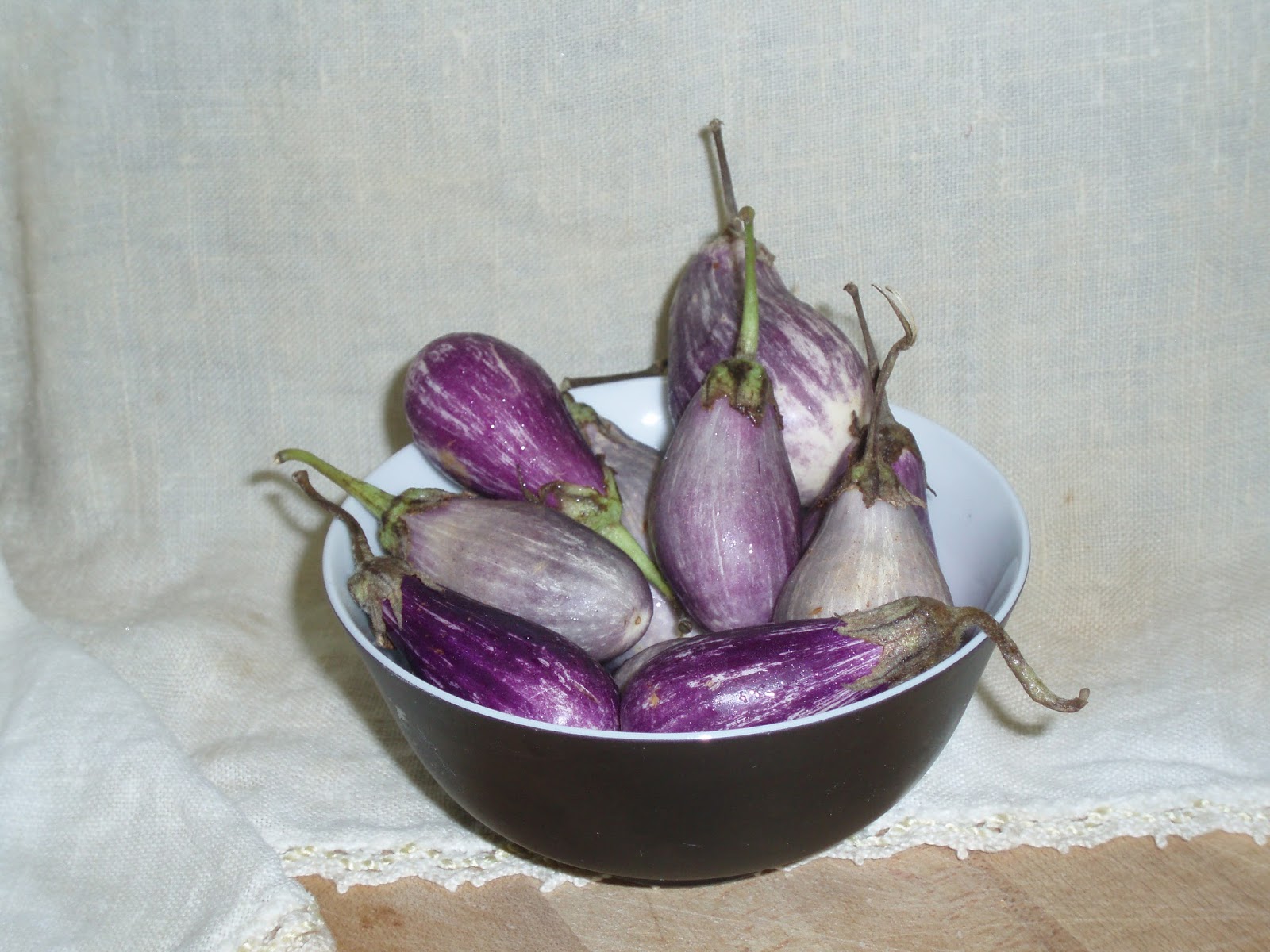 We got the cutest little eggplants from the CSA… 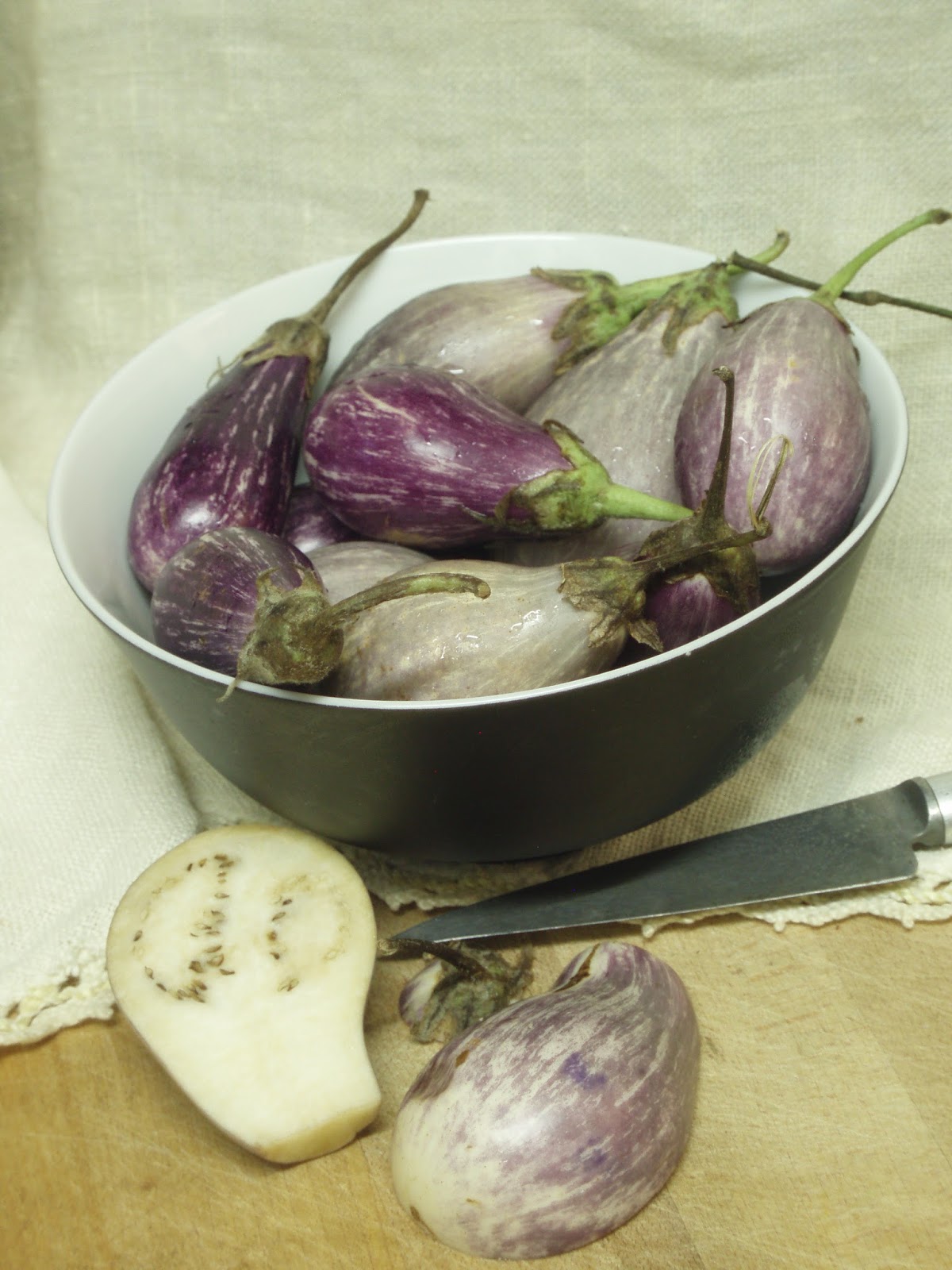 I don’t normally go all ecstatic over Cute – but really, aren’t these adorable? Delicate, tiny little things, streaked with lavender, almost too pretty to eat.

I couldn’t see just simmering them into a sauce, or mushing them up into baba ganoush or some other spread. They had to stay intact. So I decided to grill them.

I also had a patty pan squash. The other day, I wrote that I haven’t really found an attractive way to cut them – but then I’d thought of slicing them to preserve the flower shape, and grilling the slices. Put the ideas together – and I had this leek I’d already trimmed (so it would fit in the vegetable keeper…) and I had a dinner concept. 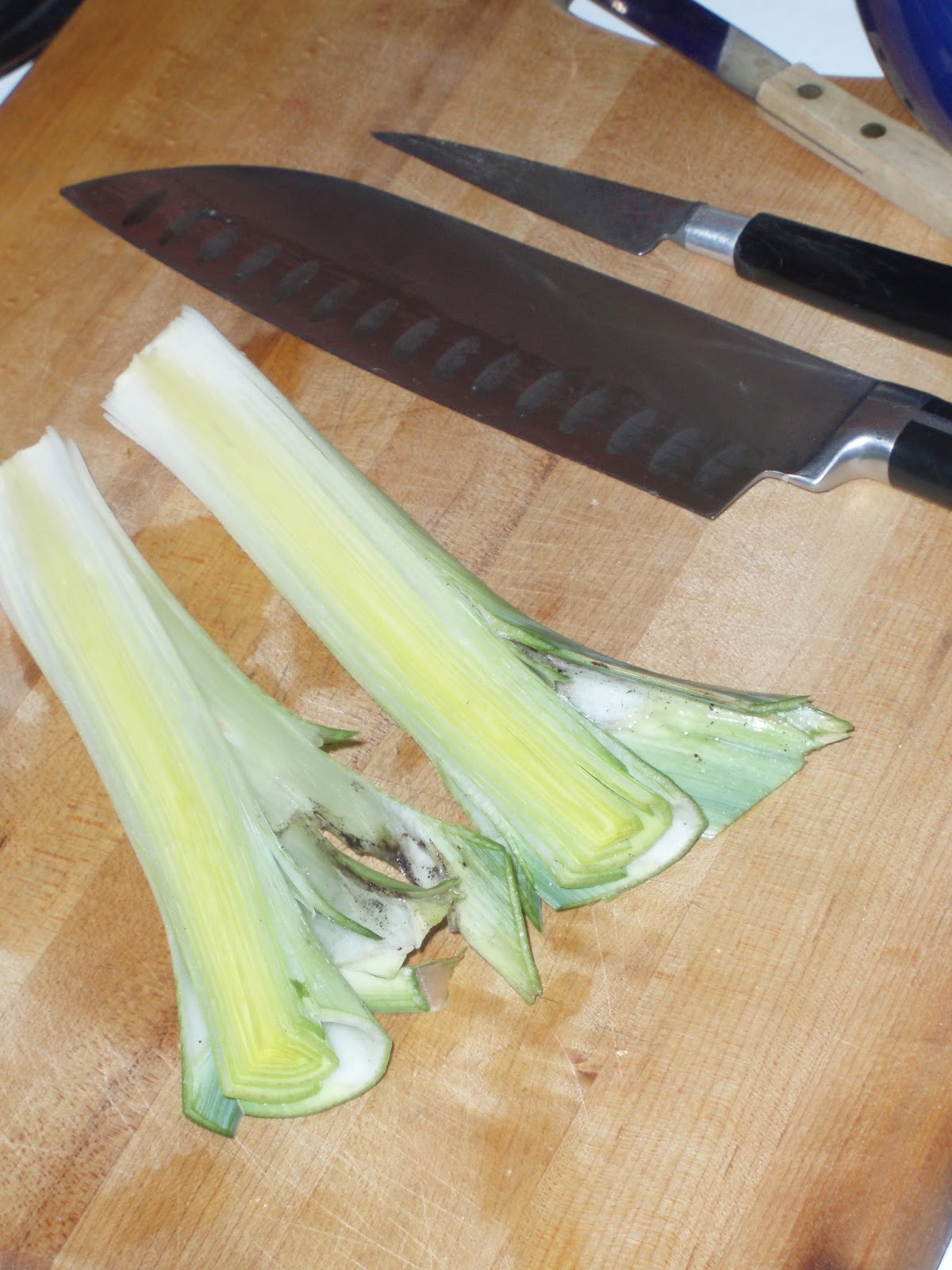 I washed the eggplants, and cut them lengthwise, to preserve the shape. Then I sliced the squash horizontally, so I had flower shaped discs. I could, of course, use the same treatment on any slices of eggplant or summer squash – I have, in the past. It’s particularly good, though, for preserving the appearance of an attractive vegetable.

I sliced the leek lengthwise, too. I’ll go into this in more detail another time – but leeks should always be slit up the middle. The way the farmer gets the nice long white part is to hill sand up around the growing plant (a process called blanching.) Since they are grown buried in sand, they get sand inside the plant, and it is almost impossible to wash all the grit out leaving the layers intact. Usually, I slit them up the middle and then slice them, but you can also, as I did here, slit them while leaving the root end intact, and then wash thoroughly under running water, to get all the grit out from inside the leek. (You can see the sand and grit in this picture… that is normal,  but it did all wash out.) 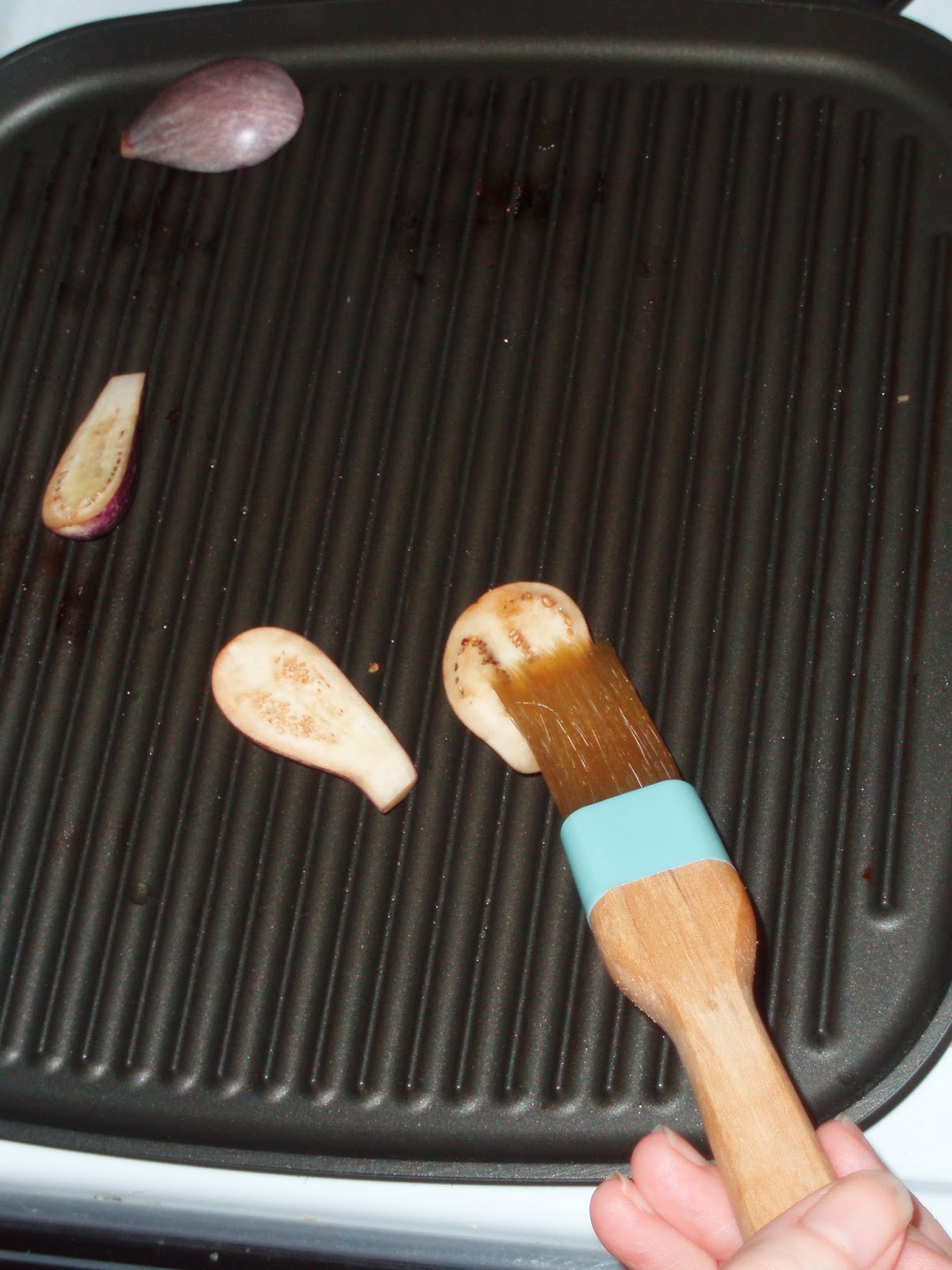 I find that grilled vegetables, even on a grill pan (rather than an outside grill, which I do not have) cook better with just a little oil brushed over them. In this case, I put a splash of olive oil in a bowl, and then added just a drizzle of sesame oil for flavor.

I used an open pan – this could also be done with one of the closed grill pans – George Foreman is well known, but Cuisinart has one, also, and there are others. The vegetables will cook more quickly in one of them, partly because heat is being applied to both sides, and partly because the natural steam is being held in to some degree – an advantage with the vegetables. The disadvantage to them, though, is that bigger pieces hold the top up, so it doesn’t touch the thinner or smaller pieces. They work best when all slices of food are the same thickness, which was not the case here. (If you don’t have a grill of any kind, you can do this in any good skillet – the whole side will brown nicely, instead of giving you pretty grill marks, but that doesn’t make a serious difference.)

Anyhow, I used a pastry brush, and lightly  brushed one side of the vegetables with the oil mix, then put them oiled side down, on a preheated pan. I wanted the pan to be hot when the veg first hit it – that’s what gives you the nice browning effect. Then I brushed the side facing up with oil, so it would be ready when I flipped it over.

Unfortunately, as they cooked, the eggplants did lose the pretty lavender color… oh, well. They made up for that by attaining the pretty brown grill marks…  I watched them, and, as the individual vegetables showed signs of softening (and changing color) I turned them over with tongs. 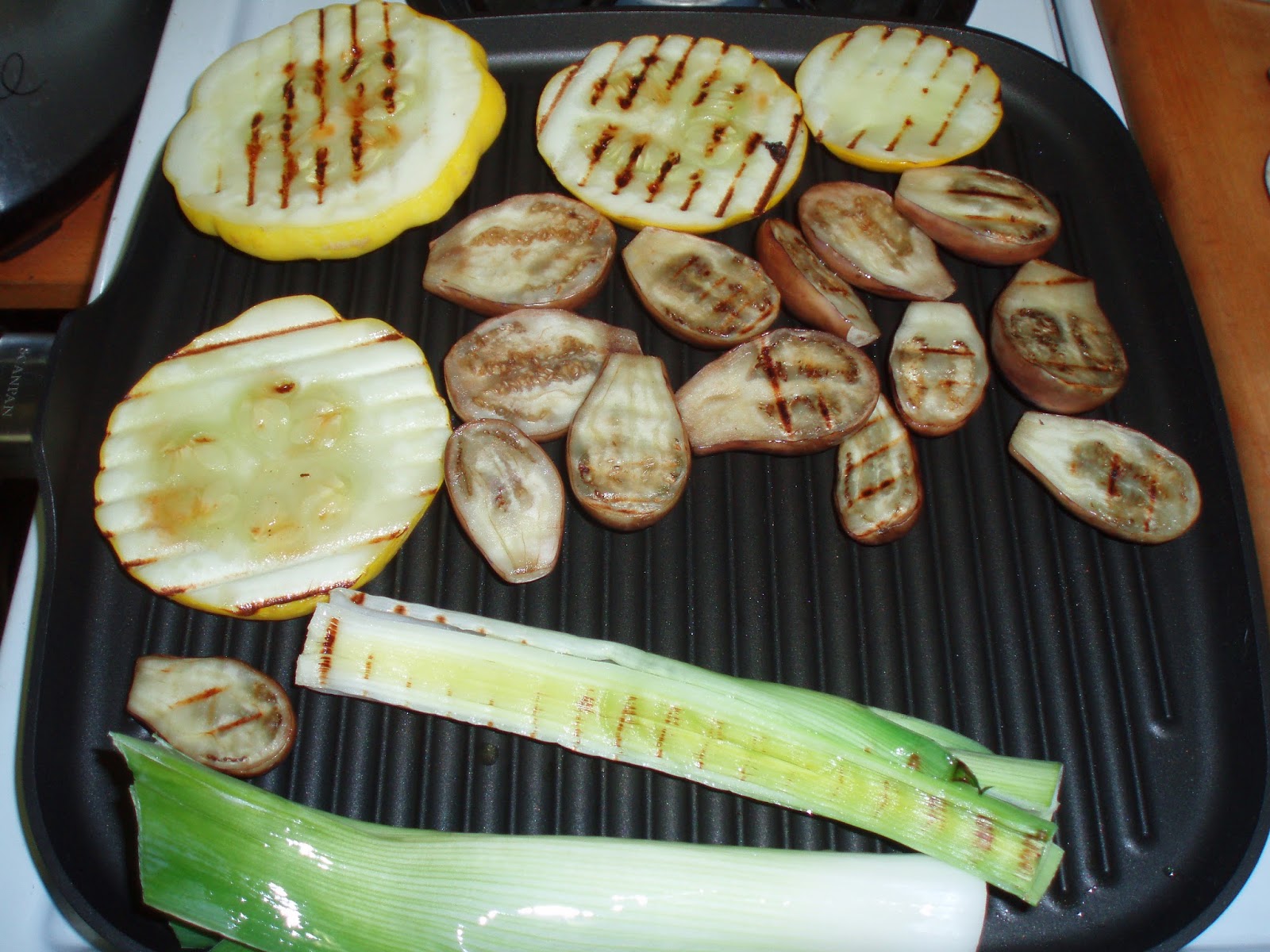 I had more than fit on the pan, so, as they then cooked, I removed them to a platter, which I covered to keep them warm. I was cooking potatoes and leftover ham for the rest of the meal, so I microwaved the potatoes until mostly but not completely cooked, then sliced them and added them to the grill pan for browning. (In my microwave, that was 2 minutes for four small/medium potatoes, then turn them over and give them another 2 minutes. I find that timing varies considerable by oven, though – that would have taken a minute or two longer in my previous one.) Meanwhile, I heated the ham in a fry pan, until it, too, browned. 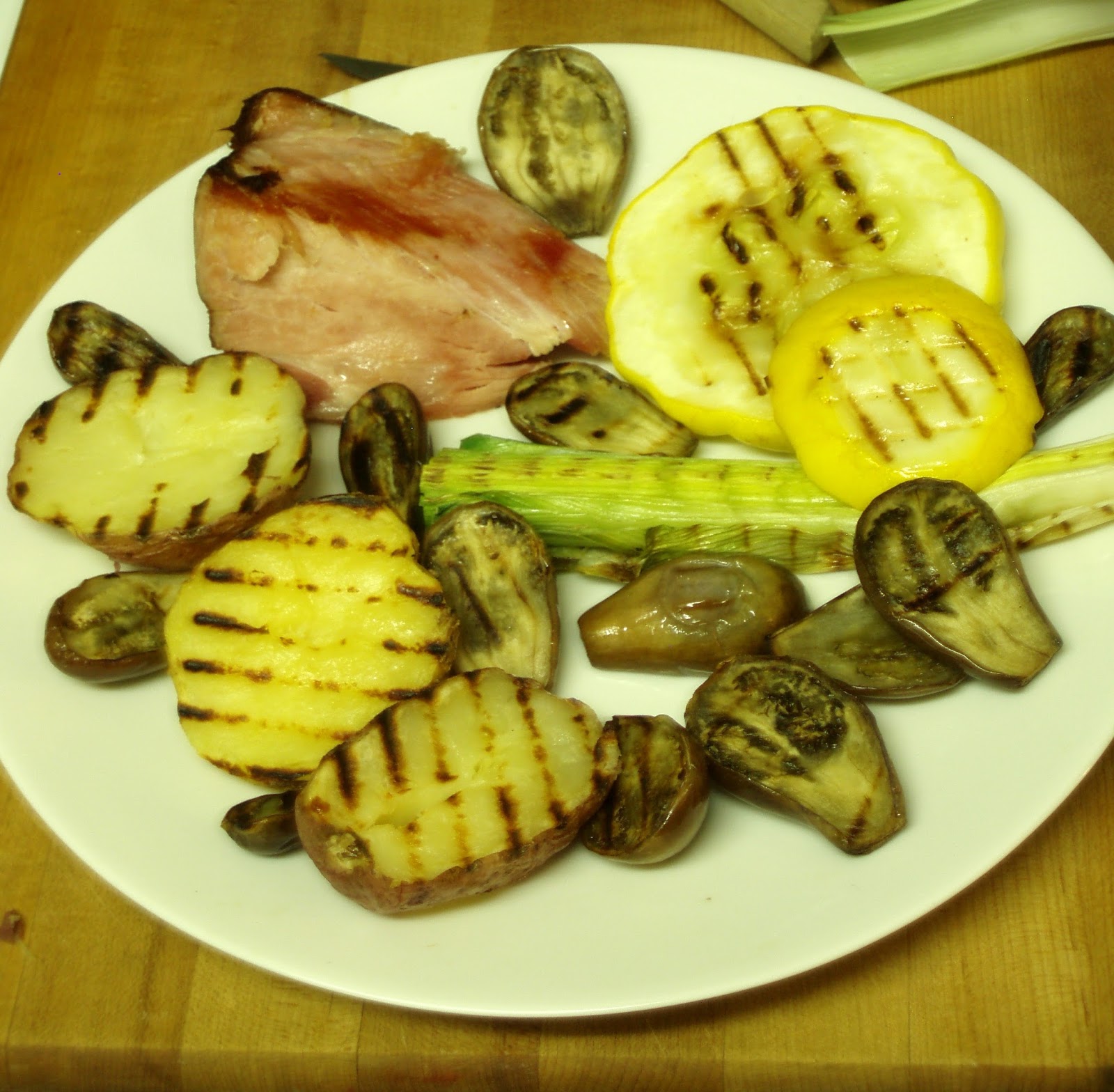 Notes for future – the leek was basically cooked, but a little bit chewy, still. Another time, I might start it well before the more tender vegetables, or parboil it, or (more simply) microwave it a minute or two, as I did the potatoes, to, essentially, parboil it.

Also, Rich said he felt the ratio of skin to meat on the eggplants was a little high. Well… He suggested peeling them, and I suggested that he was welcome to peel a dozen tiny ones if he really wanted to, though I wasn’t sure how much eggplant that would leave, and… The real issue was that, while the meat was tender, the peel was just slightly tougher – so parboiling might be an option for them, also. (I didn’t mind it. OTOH, in general, he likes eggplant better than I do, so keeping him really liking it is worth something.)  Of course, if I were just grilling slices of larger eggplant, which would be more common, none of that would be relevant. On the whole, we did like it, and felt it came out well, as an experiment.

The other thing we were experimenting with was taking pictures. I do want to improve them, and Rich is the photographer in the house. So he hauled out a tripod, so we could try available light, instead of flash… and you see the results. (Now we’re working on another light source…)

Meanwhile, though – this is a *tiny* kitchen. The building was built in the late Forties, as part of the G.I. housing rush, at the height of the fascination with the inefficient Efficiency Kitchen. Two people cannot work together in this kitchen. (Two people can barely stand together in this kitchen!) So, there we were – him and me and the tripod, with not really enough room for any two of the above, when the Big Cat (all 20 pounds of him) decided to join us, and stretched out smack in the middle. So helpful… He’s going to Inhabit that Kitchen, all right!

Wash vegetables, and slice into appropriate shapes. If desired, microwave or parboil tougher vegetables, until barely cooked, so they cook in much the same time as the more tender ones.

Heat grill pan. Mix the oils in a bowl. Use a pastry or basting brush to brush the oil very lightly on one side of the vegetables. Place the vegetables on the hot pan, oiled side down. Brush the other side with oil.

As each piece cooks (determine by color and tenderness) turn it over. If you need more than one batch, removed cooked pieces to a platter, and cover lightly with a clean towel, to keep warm.