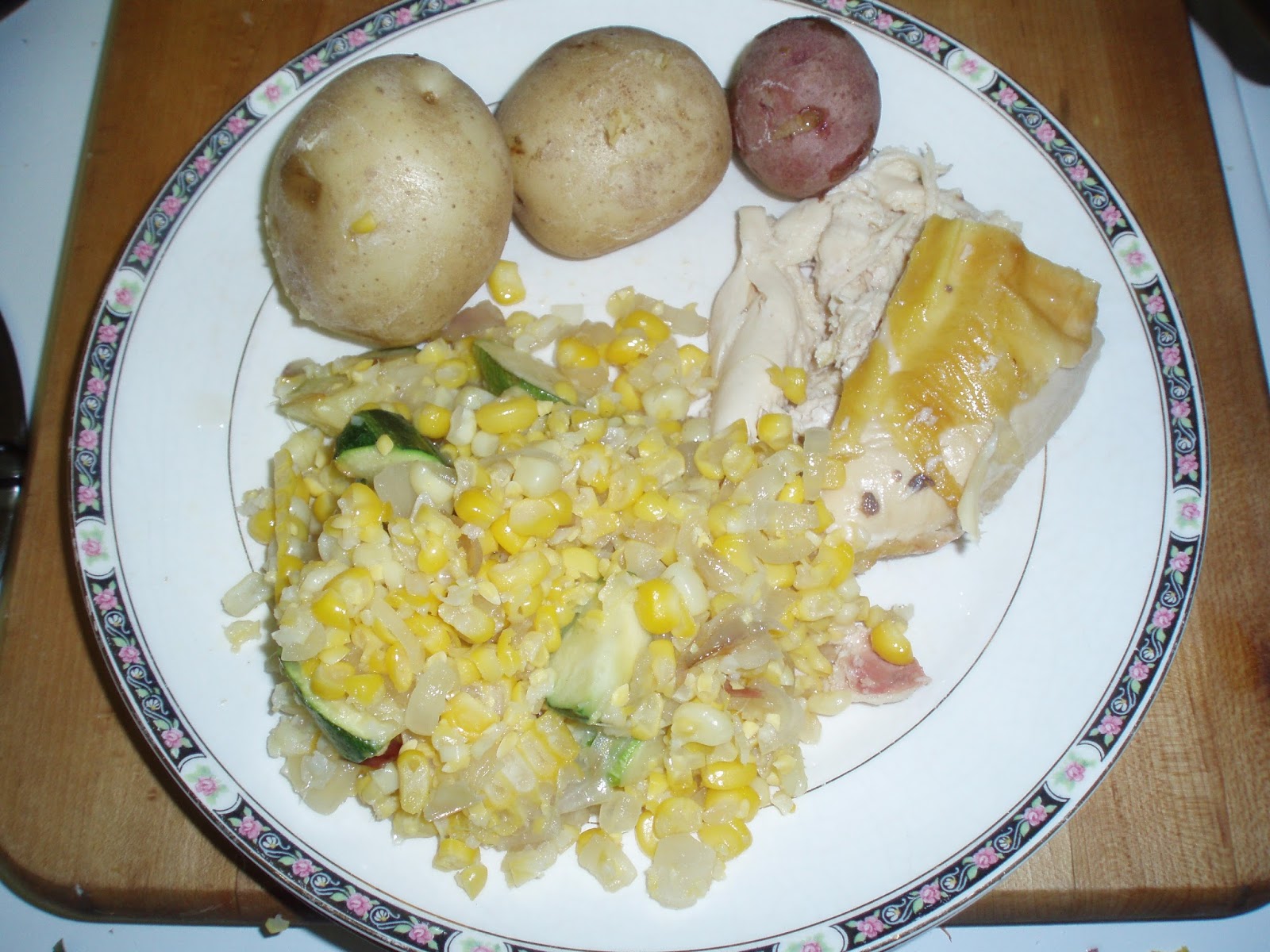 Sometimes a meal just tastes like a season, to me…

We have corn, now, and zucchini… We have the first tomatoes, now, and are glorying in them raw in salad, but I’m not cooking them, yet. That comes later, with abundance. 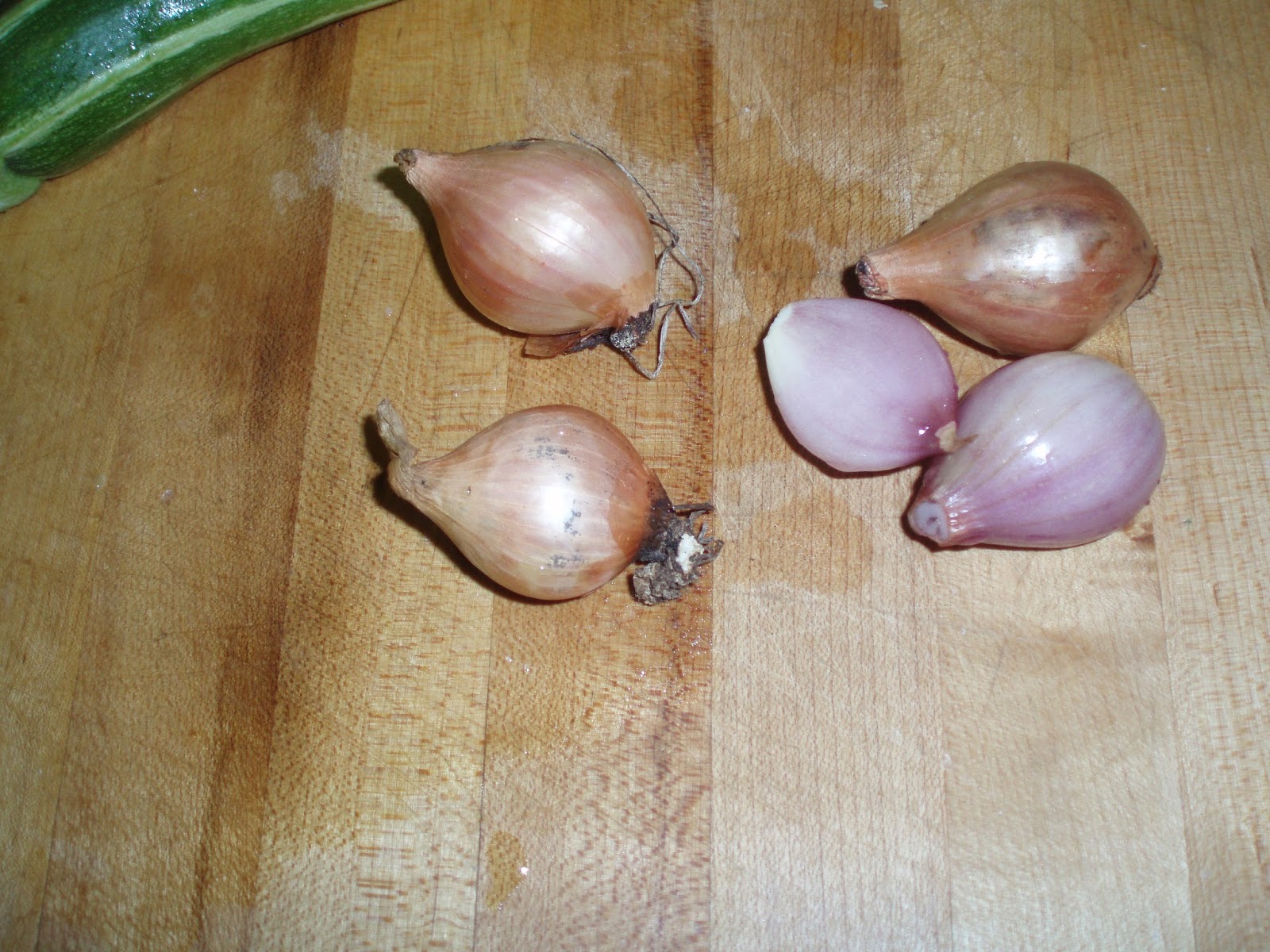 I get most of my vegetables from the CSA, but I stop at Greenmarket to buy fruit, and occasionally fill in something specific I need. Last week, one of the farmers had beautiful shallots – at the same price as yellow onions! So I bought some.

When I started to cook, I chopped a few shallots and dropped them into my prepared pan.  My what?

I put a frying pan or saute pan over medium heat, and let it heat for a minute or two, while I chop my onion/garlic/shallots. Then I pour in a very small amount of olive oil, and rotate the pan – the heated pan warms the oil and lets it spread all over the pan quite easily, so there is a film of oil covering the surface. I really use a teaspoon or even less… even in multi-ply stainless steel or cast iron.

Then I add the aromatics. That’s a handy phrase for a variety of vegetables used, in this context, mostly for flavoring. Onions and garlic, other aliums such as shallots, or leeks, but also peppers (either sweet or hot,) celery, sometimes finely diced carrot… Which ones you choose strongly affect the flavor of the finished dish – enough that simply varying them can change a whole meal.

I’ve mentioned combining flavors in traditional ways. The choice of aromatics is so traditional that it has names in several cultures. French mirepoix is onion, carrots, and celery. The sofrito I’ve heard about from neighbors was onion, garlic, and hot pepper – but I gather that varies widely in different Caribbean cultures, and is different still back in Spain. The Cajun combination (sometimes referred to as the Holy Trinity) is onion, garlic and green pepper. And, of course, you can use your own selection, dictated by family tradition, desired taste on the day, mood, or simply what you have on hand. (The latter, of course, is a major influence on all the traditional mixtures – we’re fortunate enough to have choices.)

So, anyhow, I cook the aromatics, usually just until soft. (And, in this case, I only used the shallots, not a mixture.) Then I add the rest of the vegetables.

I had zucchini from the CSA.

This is a Japanese cutting technique called a roll cut. I learned it back when I was first cooking, and have used it routinely ever since for round vegetables like carrots and summer squash. It creates irregularly shaped chunks with a lot of surface area, and I find it allows the vegetable to cook very evenly. When I was a child, I didn’t like zucchini, because it was often cooked to mush. This technique helps prevent parts becoming mushy before the  rest is soft. 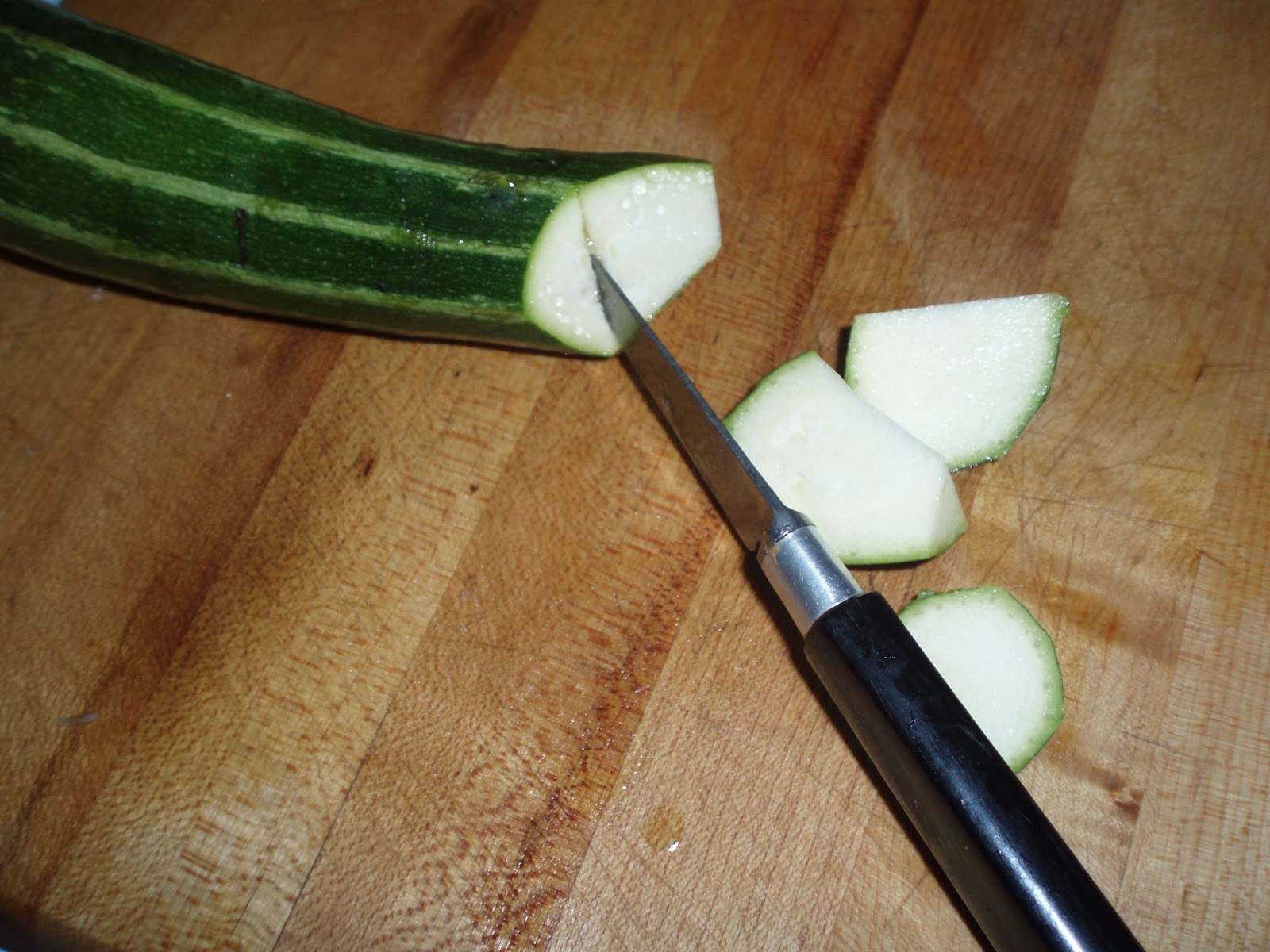 Basically, you cut the vegetable at an angle, instead of slicing it. Then you roll it slightly, so the knife, held at the same angle, is now cutting the vegetable at a different angle. This gives you oddly shaped chunks, with a great deal of surface.

And, of course, you can slice or cut your vegetables into cubes – it’s your cooking, do whatever you and your family like! 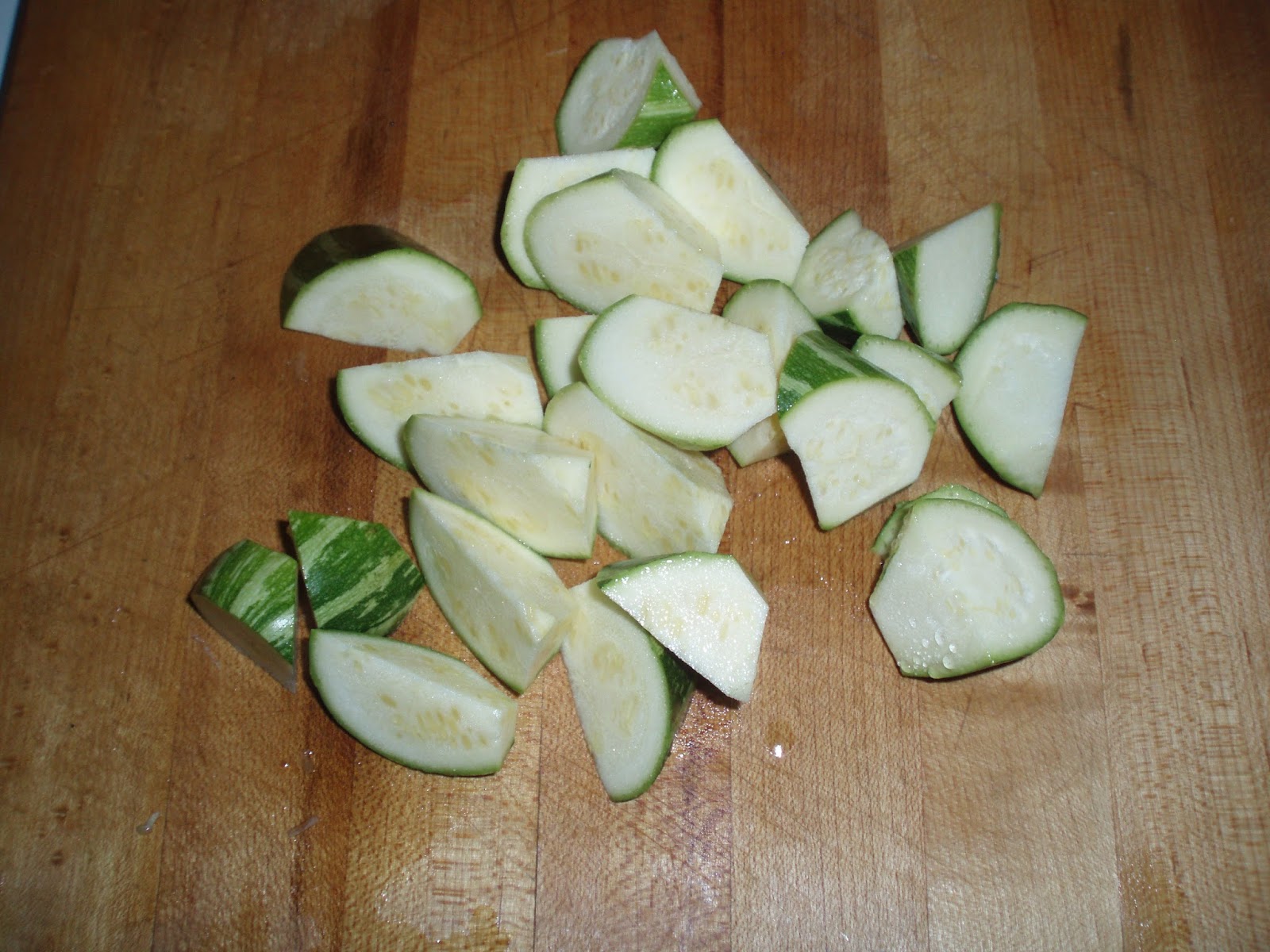 I then added the zucchini to the hot pan with the onion. (This all took much less time to do than to explain…) I stirred it around, and let it cook.

The abundance of summer… corn… We’ve had corn on the cob, but sometimes we have a single ear, sometimes I can’t use it for a day or two (so even supersweet isn’t at its peak,) sometimes I just want it off the cob… And it is (not surprisingly) a wonderful combination with the other midsummer vegetables.

In this case, I took an ear of corn, microwaved it just three minutes, and let it cool a little still in the husk. I then cut off the kernels. You can, of course, cut it raw, but I’ve found that cooking it slightly makes them easier to cut (without getting them all over your kitchen…) I added the corn to the pan with the now softened zucchini, and scraped the ear to get all the germ and milk. 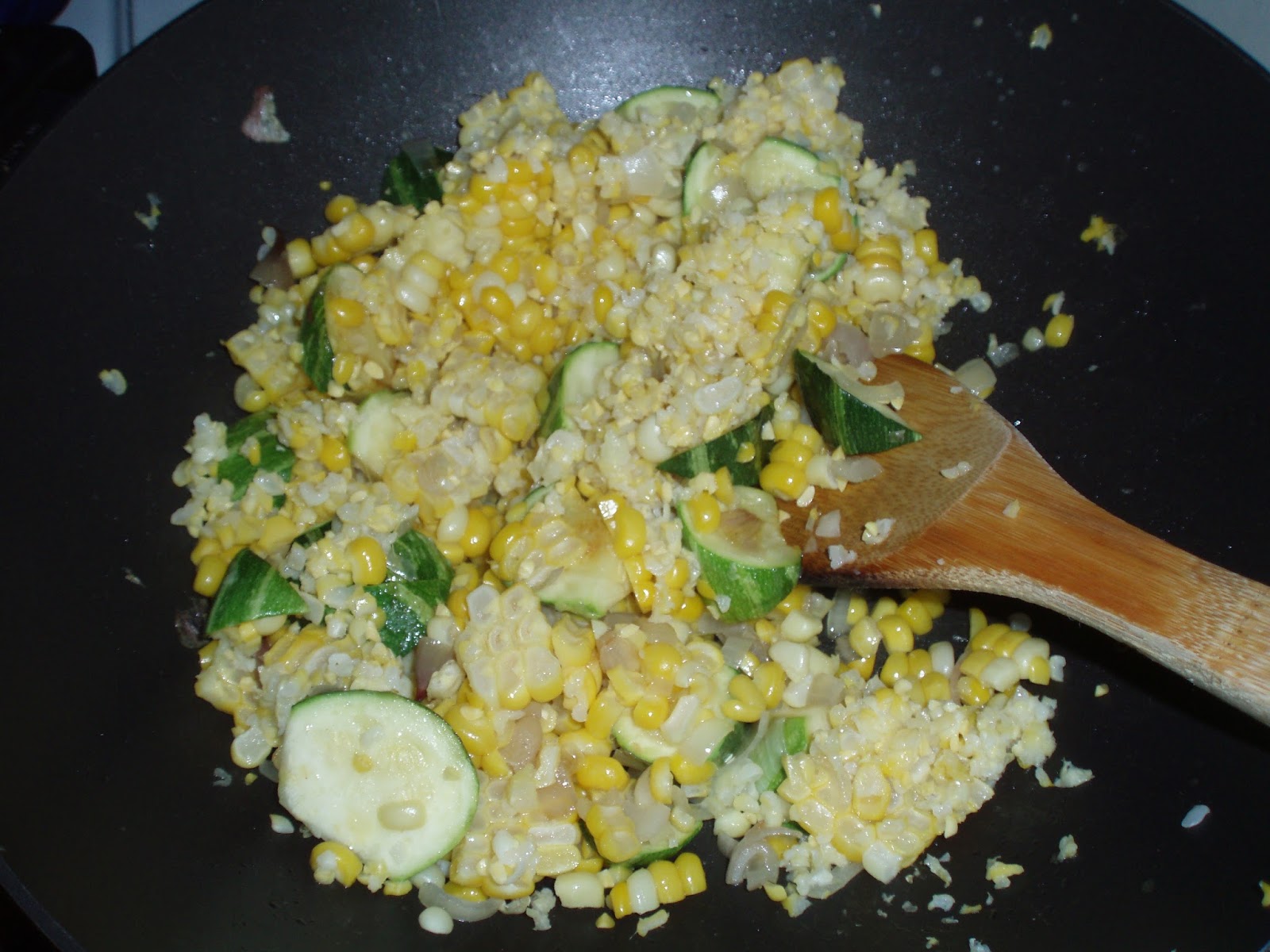 The corn was already mostly cooked, so I stirred it around until everything was heated through, and cooked to our taste.

Then I served it with small boiled new potatoes, and a piece of roast chicken. The perfect summer meal! 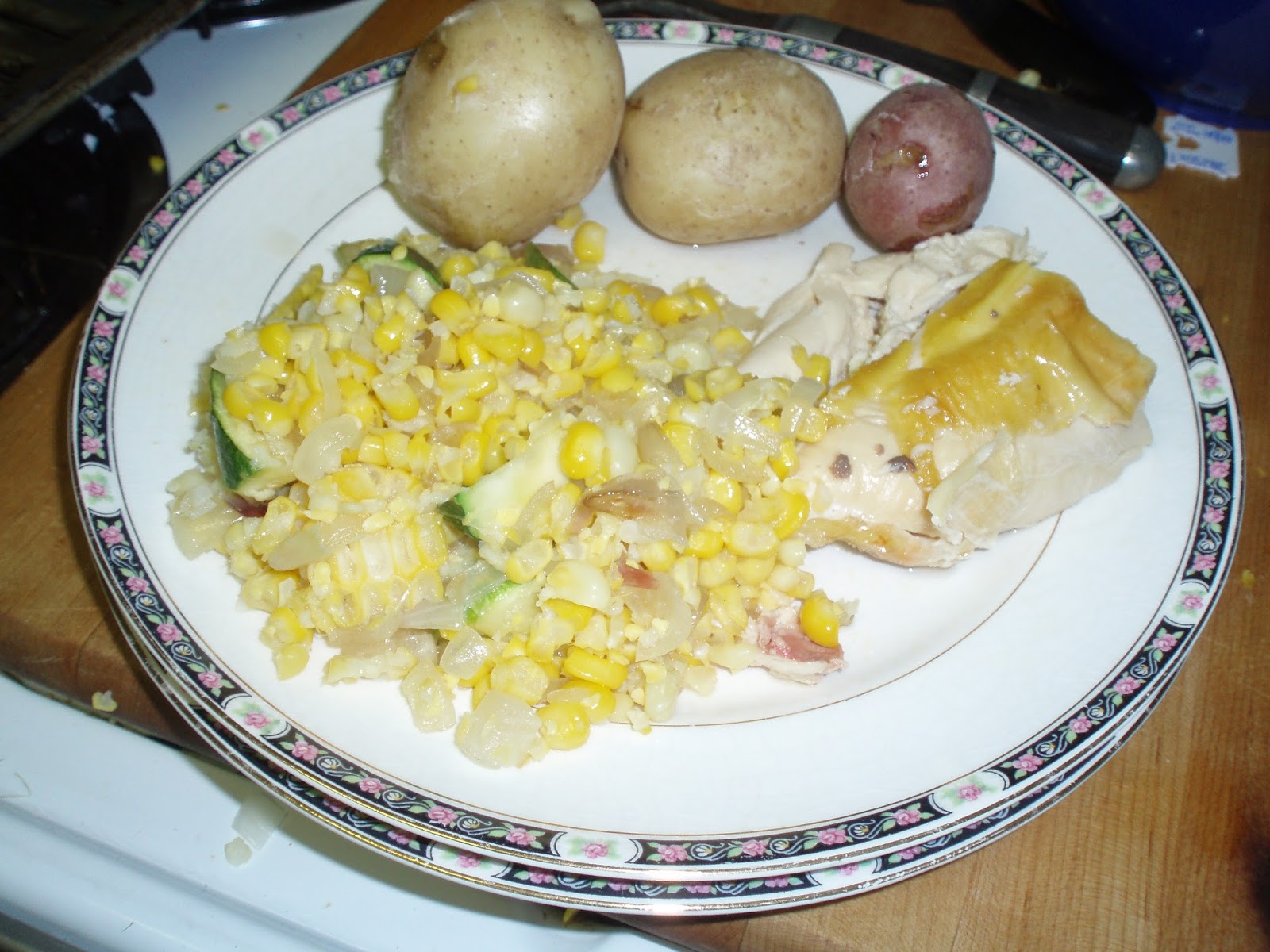 Cut corn kernels from cob. Add corn to pan when zucchini and shallots are almost cooked to your taste. Stir.

Cook until all vegetables are cooked to your taste – usually just another few minutes.

Corn on the cob – in the microwave?!
Grilled Summer Vegetables – Pretty Little Eggplant…