Ratatouille – or… Using Up Vegetables

So – ratatouille. It’s a classic French dish from Provence, a stew of summer vegetables. Roughly equal amounts of eggplant, zucchini, and tomato, with onion, garlic and basil. Unlike most vegetables dishes, it’s cooked until the vegetables are soft, and freezes (and reheats) beautifully.

And, well – we’ve been getting eggplant every week, and it’s getting ahead of me.

I also had a couple of zucchini – bigger than I usually like, though still pretty tender. (I don’t know how our farmer does it – we get big squash that haven’t gone to seed… Choice of cultivar, I assume, but I’m not used to seeing it elsewhere.) And I had some tomatoes, though not really quite enough for the traditional proportions.  (Yes – I know the home gardener usually has Too Much Zucchini. Our farmer is careful not to overwhelm us with it… and I can use a lot of it anyway, as it cooks so easily. The same concepts apply, though.)

First, let me address the tomatoes. I had several choices of how I wanted to deal with that. I could, of course, just make something else. I could make a small amount of ratatouille, using the tomatoes I had, but less of the eggplant and squash than I wanted to. I could go out and buy more tomatoes, or use a can of diced tomatoes.  I could go ahead and make it with the “wrong” proportions, and either eat it or freeze it as such.

My choice was going to be dictated by my goal. If I were, for example, cooking it for a dinner party and trying to impress someone with my cooking, I’d definitely either change what I planned, or go buy tomatoes. In this case, though, the goal was to do something with all those eggplant, and maybe work down the squash, too, because this is the time of year when the CSA gets ahead of me, and I may get more vegetables than I can use that week. I like, though, to have some prepared vegetables in the freezer, for winter, or just for busy days.

I decided, therefore, to just go ahead and cook it as it was, freeze it all,  and add a note that I might want to add tomatoes…  which, then, I may or may not do. I can get good quality diced canned tomatoes, so that’s an easy option, down the road – and, in fact, this saves me freezer space.

First, I chopped a large onion, and a big clove of garlic, and sauteed them in olive oil. I was a bit more generous with the oil than usual, as that’s a traditional ingredient of ratatouille and adds richness, and I was going to want enough for the rest of the vegetables, too. I cooked them until they were just starting to soften. 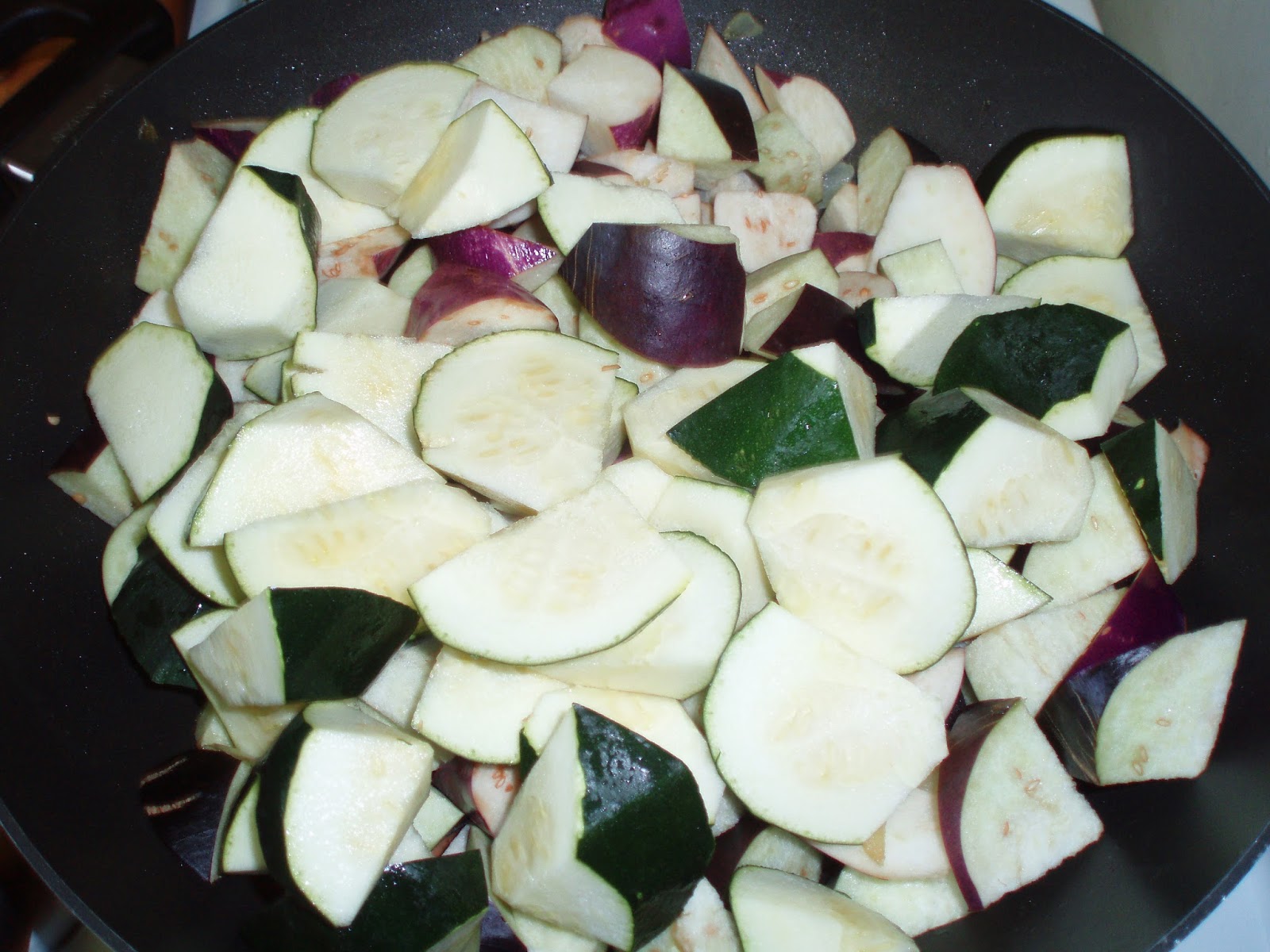 Meanwhile, I cut the eggplant into big chunks. I added them to the pot, and tossed them with the onions and oil. Did the same with the zucchini. Then I chopped the tomatoes and added them. I didn’t bother peeling them – we don’t mind a little tomato skin in our food.

You sometimes also see directions to press out all the liquid and seeds. There are a couple of problems with that… First, the gel around the seeds has a lot of the flavor, so you’d be losing that. And, in this case, I want to have some liquid to start this – as the other vegetables cook, they will release plenty of moisture, but I want a bit of liquid in the bottom of the pan to start it. (And – well – I tend to leave out the fussier steps – but that’s a  matter of individual taste. They’re not worth it to me – they might be to you.)

A glance at the picture will tell you that I had less than half as much tomato as I did eggplant. But that’s OK… While I was working on this post, I was talking to a friend about the ratatouille she was making – she didn’t know I was working on this, but we all have eggplant, it’s that time of year – and she was talking about red and green peppers. Peppers? I’ve eaten it with peppers, but also without, and I’m not sure I ever cooked it with peppers…
.
I hauled out the Larousse Gastronomique I recently inherited – the arbiter of French Cooking…  Yes, peppers… (though it doesn’t specify red or green.) But I’ve certainly eaten it, prepared by others, without peppers… and I’ve always… wait… I’ve always cooked it without peppers, but I’ve made this since I was in my late teens or early 20s, and was still at my parents’ house much of the time. And my mother was allergic to bell peppers, which means that I have absolutely no idea whether or not the first recipe I followed included peppers – I would have left them out reflexively.

A key to this sort of adaptation is understanding the major flavors of the dish. The keynote, as it were, of ratatouille is eggplant, with zucchini and tomatoes as the secondary layers. (I’ve always heard it described as an eggplant recipe, with Summer Vegetables coming second – never as just a zucchini recipe…) Onions, bell pepper, garlic, herbs are all grace notes. They add to the flavor, but they are not central. So I could make a delicious stew with zucchini, tomatoes, and peppers – but it would not be a ratatouille. This is – but just barely… it really should have a little more tomato to *properly* be that classic dish.  So, I may serve it as is, or I may add a can of diced tomatoes – it will depend on how and when I use it.

Anyhow, I tossed all the vegetables in the pot, to coat them with the oil, and mix them thoroughly. Then I put a lid on, set the heat very low, and let it all simmer about 15 minutes. When I came back, the vegetables had started to shrink, and liquid was cooking out of them. I stirred them some more, and continued to simmer them, over low heat, without the cover. Oh, and I added about 2 teaspoons of crushed dried basil.

Normally, I prefer zucchini just lightly cooked, still firm, not mushy. Eggplant, though, needs to be cooked soft… and this medley works best if the texture is all the same. So, I continued simmering it until all the vegetables were soft, and the flavor had melded – and most the liquid had cooked off. If I were serving it immediately, I might have left it moister, but I didn’t want to give freezer space to water, and, if I add tomatoes later, I’ll be adding their liquid… I cooked it about half an hour, all together.

I let it cool, then, and packed it simply in take out containers. I’m not actually going to keep this long – I’ll make another batch and freeze it in freezer containers, which let in less air and take less space in the freezer. This will just be prepared food for times I can’t cook.

Saute onion and garlic in oil until starting to soften.

Chop eggplant and zucchini into bite sized pieces. Add to the pan, and stir to coat with oil.

Remove cover. Add basil. There will probably be a good bit of liquid in the pan. Let simmer without the cover until it has cooked off a little, and vegetables are done to your taste – probably another 5-10 minutes.