People are starting to return to the idea of  putting up their own produce. People are canning, again – even here in Manhattan, high end cookware stores carry canning kettles and jars. In their desire for local food, people are buying produce and canning it, or making jams and pickles.

Yeah – I’m not going there…

OK, understand – if you enjoy it, it can be a cool thing to do. If you have your own garden, and the time and energy, it’s wonderful.  If you have a good source of produce, and like to cook, it’s a great and productive hobby. I have, in my day, made small batches of pickles and chutneys. I thought it was fun, and I enjoyed having them in winter. That’s not what this blog is about, though… 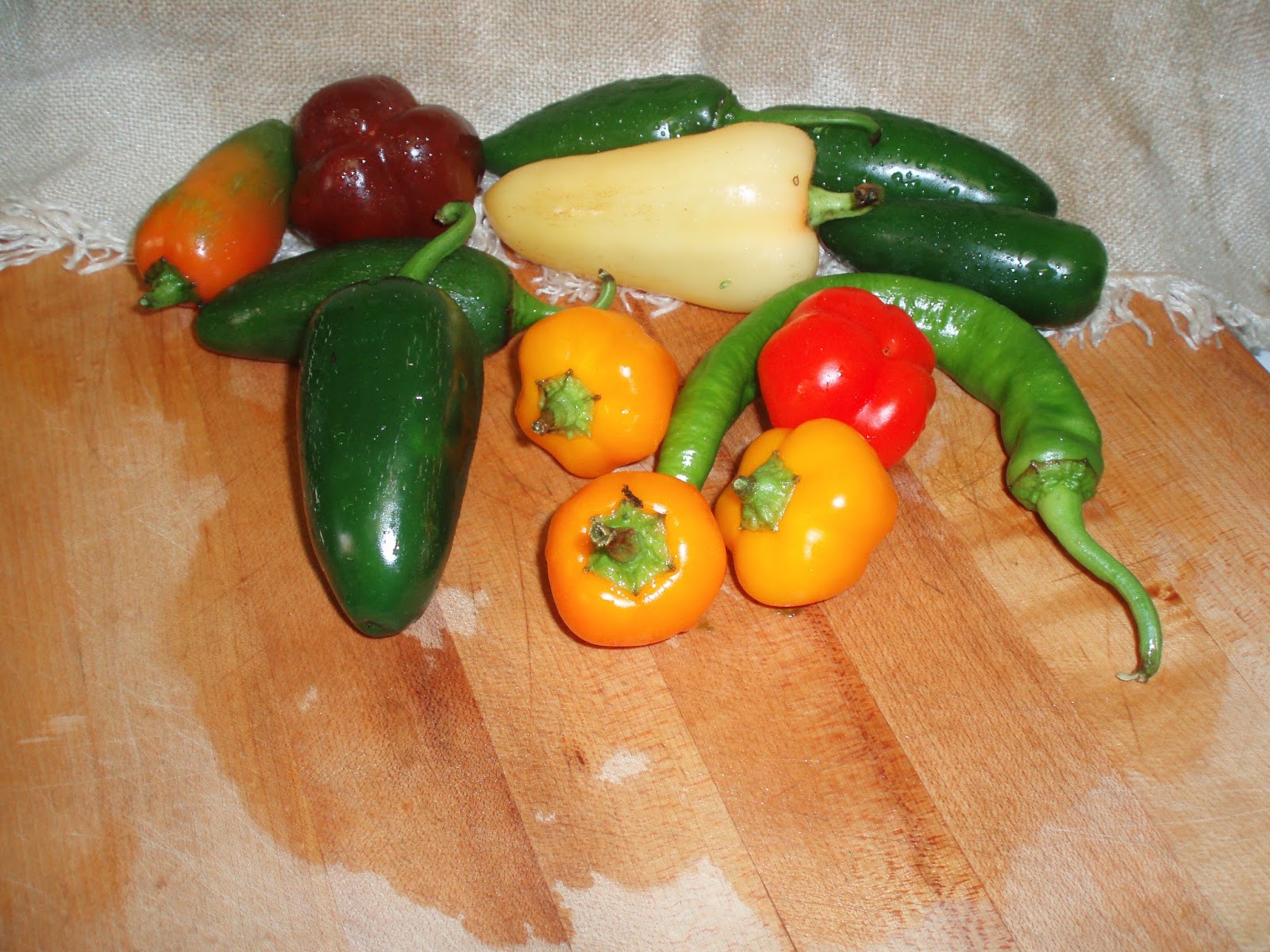 I’ve discussed my take on Convenient Foods.  This is an elaboration of that, with the seasonal nature of produce added. For example – in August and September in the Northeast, we get lots and lots (and lots…) of hot peppers. I can’t use them all at once… In fact, cooking for two, I don’t always want even one whole pepper (depending on the dish and the type of pepper.)  But I can chop them, put them in a freezer bag, and then sprinkle a little out at a time, and add a bit of zip to our meals for months. I’ve never found I needed to cook them first – they cook rapidly, and I haven’t had them deteriorate in the few months I store them.  (Most vegetables do need to be blanched or sauteed to kill enzymes.)

We interrupt this blog to give the Pepper Warning.

Hot peppers are – HOT. When cut, they exude capsaicin, which sticks to your fingers. It burns. This is easily avoided… so avoid it.  Wear gloves, do small amounts at one time. Most of this won’t bother most people *too* much chopping one pepper at a time. But sensitivities vary, and it will still cause a great deal of discomfort, and doing it all in advance means you never have to worry about it again…

Wear gloves. These can be rubber dishwashing gloves, or latex (or other) food handlers’ gloves. Even with the gloves, be aware that you have transferred oil to anything you touched – including the hand that took the glove off… and to any objects you are now picking up.

Wearing the gloves, you still need to be very careful about not touching your face. We tend to do that without thinking – brush a hair away, push up glasses, scratch a nose… heaven forfend, rub an eye… Don’t! The skin on your face is more reactive than most other skin. Do Not Touch your Eye. I was planning this post a few weeks ago, though didn’t have a chance to shoot pictures and write it up then. I was thinking about this, while chopping peppers – and five minutes later cleverly rubbed my eye (I had hay fever) and felt pretty foolish… Remove contacts *before* handling peppers, unless you can be certain there will be *many* hours before you need to. (A friend told me that…) When you are done, wash your hands thoroughly with soap – and *still* be careful for a couple of hours.

Do not (how to put this delicately…) touch mucous membranes – your own or anyone else’s. (You don’t want to know…) That includes mouth and lips, by the way…  don’t pick up a piece of cheese and pop it into your mouth – or your child’s. (Children are more sensitive than adults.) Don’t lick your fingers 10 minutes later. 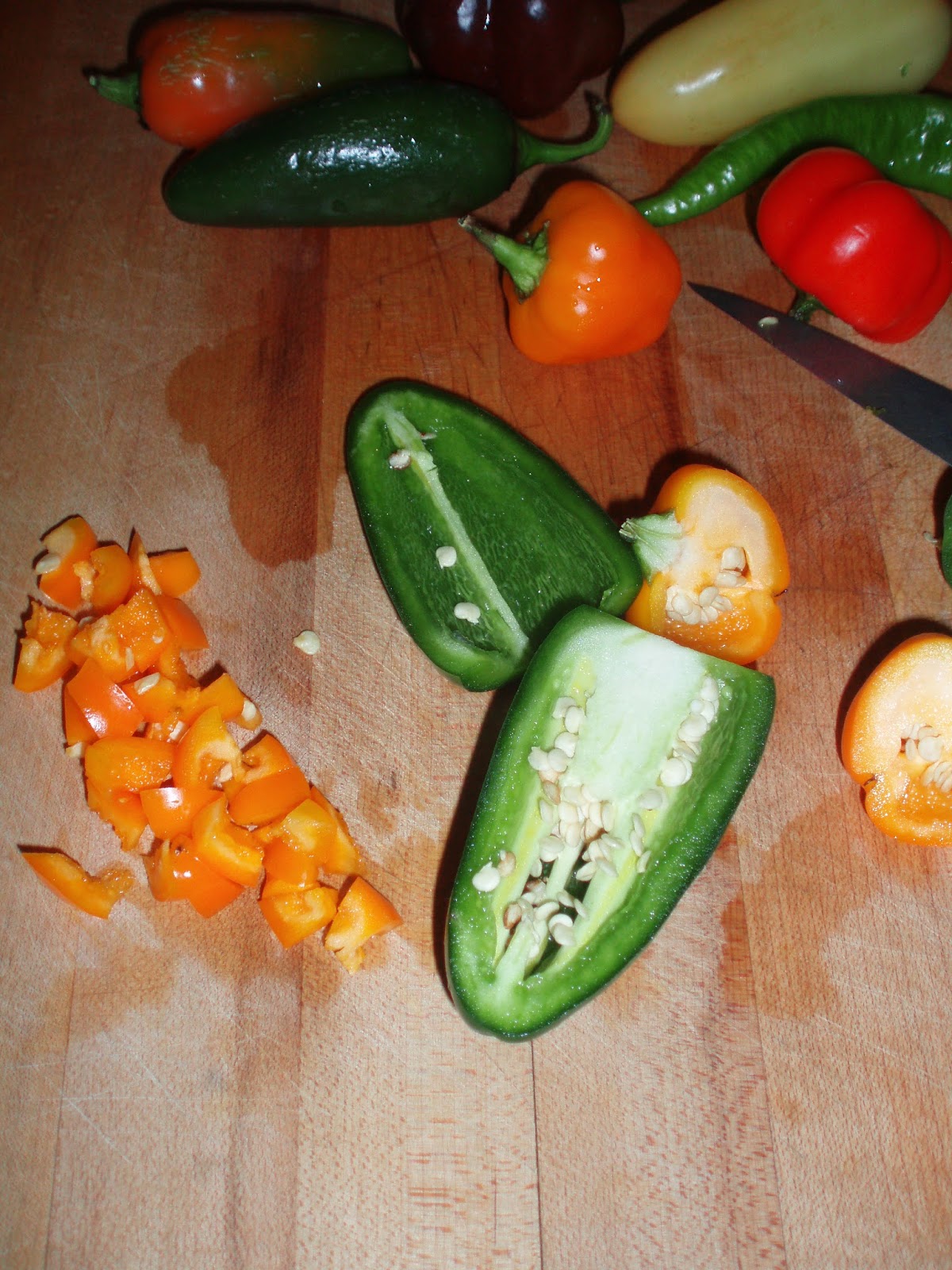 Now that I’ve scared you all… I usually actually don’t bother with gloves. I have small hands, and have trouble getting them to fit, and feel more control without them – so I try to be careful and, unfortunately, accept a certain amount of a burning sensation. As I said, though, different people react with greater or lesser severity – start by being cautious. Still, none of this (usually) does any actual damage – you just really don’t want to hurt if you don’t have to.

The easiest way to do it – the way I do so much of this – is to just chop a few at a time. Get 5-6 peppers from the market or CSA? Chop 3 this evening, toss a bit into tonight’s dinner and the rest into a freezer bag, do the same in another couple of days…  takes maybe five minutes (if that) more than you would have spent on tonight’s dinner anyway… This time, I had a lot, so I did about a dozen – but you don’t have to.

You often hear that the hottest part of the pepper is the seeds. That’s not exactly true – the hottest part is the whitish pith that surrounds the seeds. Removing the seeds *and* much of the pith is generally a good idea… I cut the pepper lengthwise, and then use the tip of the knife to sort of scrape out the seeds and pith (the knife helps me avoid touching it, as well as cutting any thick parts.) 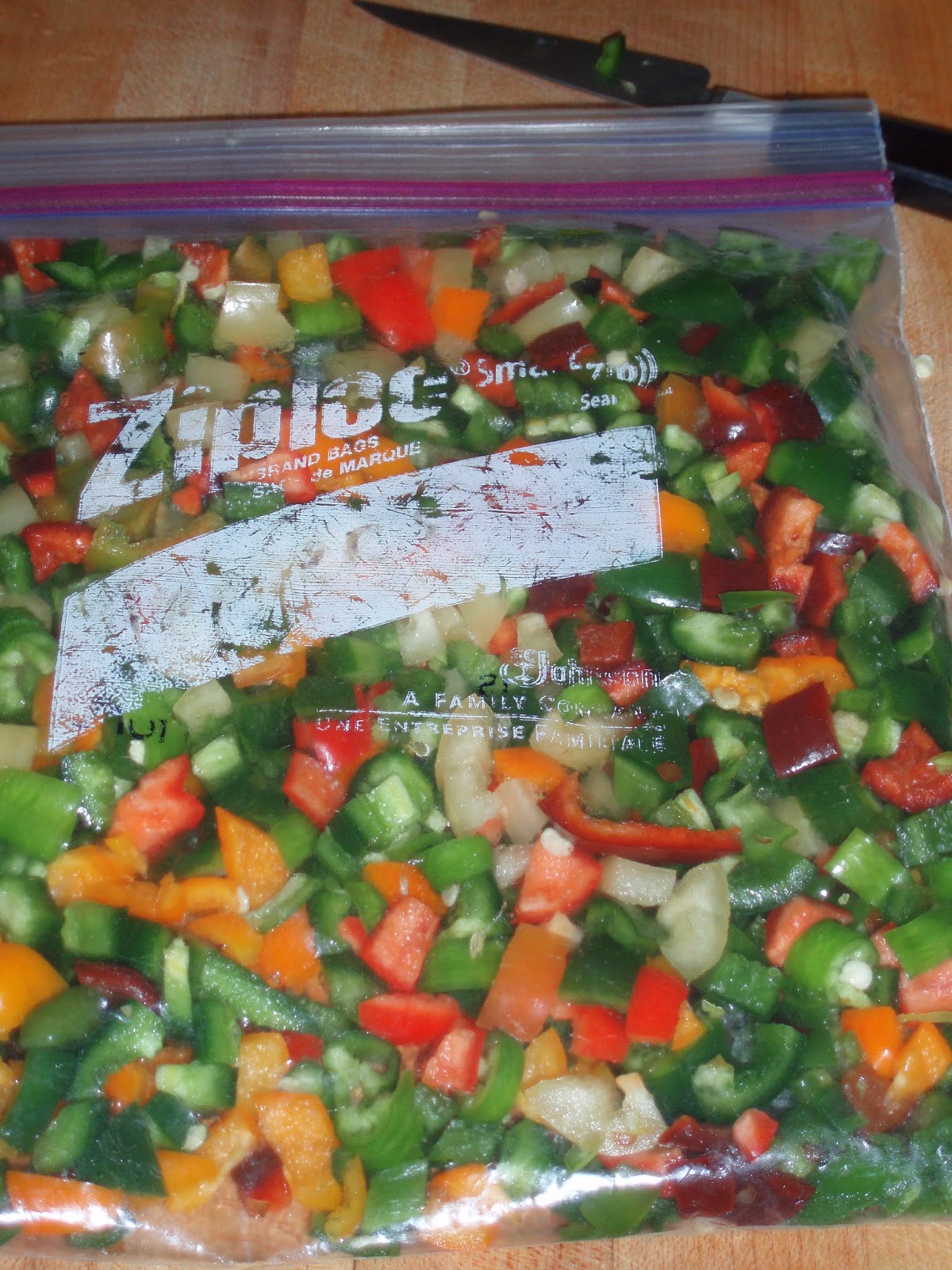 Then I chop the peppers into pretty small pieces – you don’t want to suddenly bite down on a big hunk o’pepper in your sauce – and scoop them with a knife or a spatula into the bag. One handy thing is that I find I can just keep adding, and replenishing – you can see this bag has been used a lot. I do periodically empty and wash it. And I do use up all the peppers at some sad point in midwinter…

I flatten the bag, and lay it flat in the freezer. The bits don’t stick together – after they freeze, I can put the bag, with all the peppers in the bottom, on the freezer door. That is where I keep all my assorted flavor boosts. They’re easy to find, and don’t get in the way of, or get confused with, the other food. I don’t want to have to push through frozen peppers and leeks and celery and parsley to find the cooked kale for tonight’s dinner!

I like being able to add a bit of heat without it being any big deal at all – I just drop a  little in with my onion and/or other aromatics. I like having that summer taste in December. I like that mixing the different kinds evens out the heat a little – we get a wide variety, as you see, and some are much hotter than others. If I have them mixed, I don’t accidentally get a fiery dish from using the same amount as I did of another kind last week… And, really, I like the attractive variety of colors. Don’t they look festive?

Vegetables From Space!!!
Peanut Sauce, over Tofu and Broccoli, and Tofu Tutorial