I still seem to be writing about that meal with red cabbage…  I really have cooked some other things, in between, but it hit several points I wanted to make.

Speaking about cooking the cabbage, I blithely said that I “added shredded pork.” And where did that pork come from, you ask? My freezer of course – doesn’t your freezer just produce bags of frozen cooked pork? 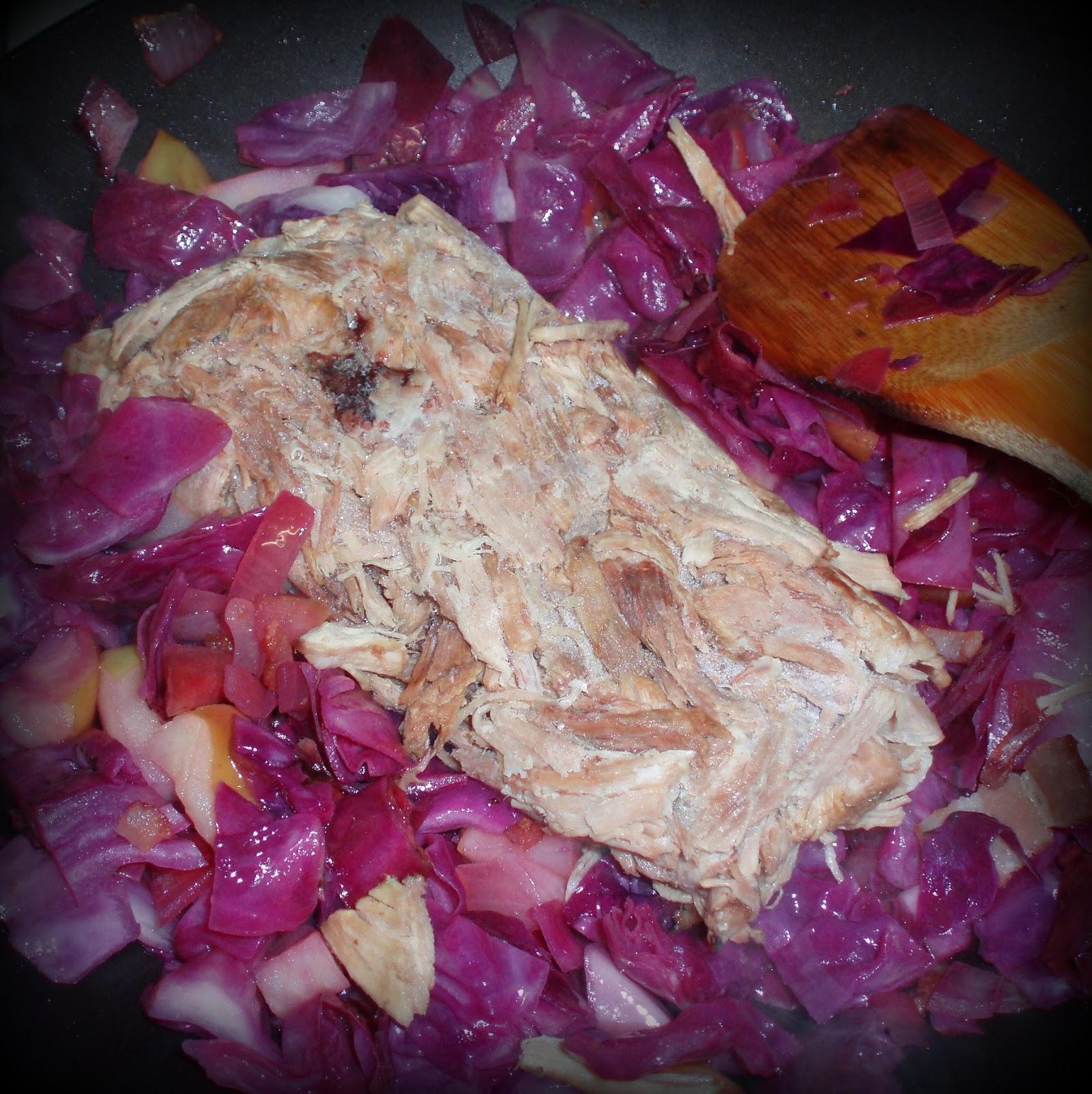 Well… mine does, but it needs a little help…

OK – first – what kind of pork?  When I started cooking for myself, in a dorm in college,  my mom took me (during move-in) to a local supermarket to get in some pantry staples and such. The meat department was full of big banner signs – they were changing their meat terminology, to bring it in line with national standards! There would be New Names for the cuts of meat! “This Cut Neither of Us had Ever Heard of” of would now be called “This Other Name We had Never Heard…”

Let me tell you – it’s still not really standardized…

So – I’m talking here about a pork shoulder. I have seen them called that, Picnic Shoulders, Pernil, Boston Butt, and other things I’m not remembering offhand… and I have read statements that any one of those names is a misnomer and refers to Something Else. It is a cut frequently used for sausage, pulled pork, pernil (by New York Puerto Ricans, at least –  a major online debate I found was that this is the Wrong Cut for that dish in the rest of the Hispanic world, but, like it or not, this is its primary use in my neighborhood… and the stores all call the cut pernil.)

It is high in fat, tough, a bit awkward to cut off the bone, and, therefore cheap… and it is wonderful either ground or in any long, slow,  low temperature preparation. Tender and delicious – the fat largely cooks out or can be easily removed, but it keeps the meat juicy and delicious. Keep the tender pork loin for chops and roasts – you want a shoulder for this. 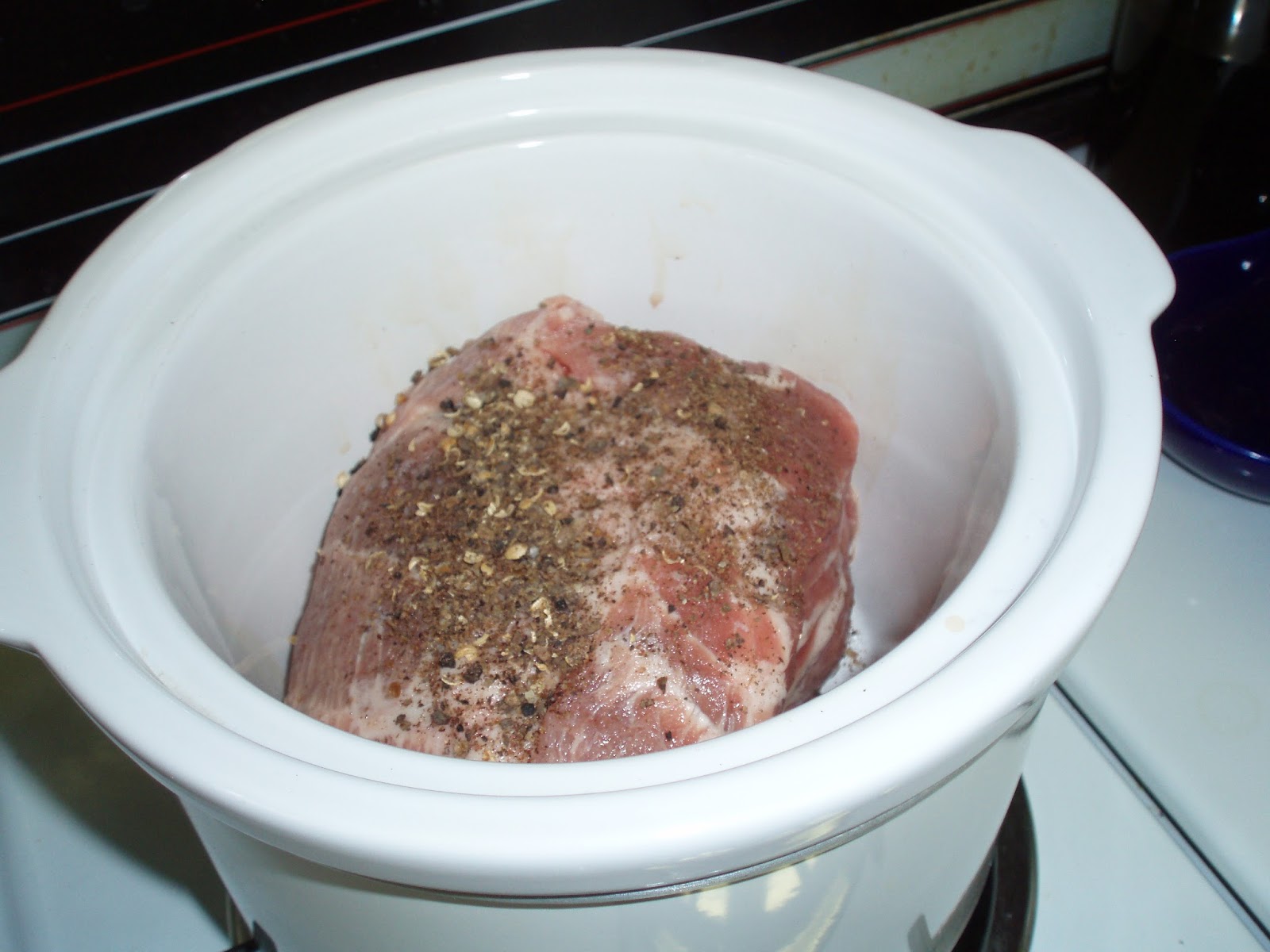 The tricky part is that it’s a large cut – seven pounds or more. (That includes both bone and fat – you end up with much less meat than that…) And it’s usually sold with the big bone right there in the middle. So all that’s a nuisance for a small family. On the other hand, all the preparations I mentioned are really good for making ahead. Sometimes I’ll just cut off one or two large chunks of the raw meat, and freeze them, to use later in my mini slow cooker, and then simmer the  rest. Or, I’ll just cook the whole thing.

My preferred way to cook it is in a slow cooker – but that long bone doesn’t fit in many round cookers, including the one I have right now. One reason I prefer the oval type – several kinds of food come oval – but there we are, this is what I have now. It does fit – just – in my soup pot. Sometimes I add spices, such as coriander, or allspice,  but often I cook it plain, to season later. 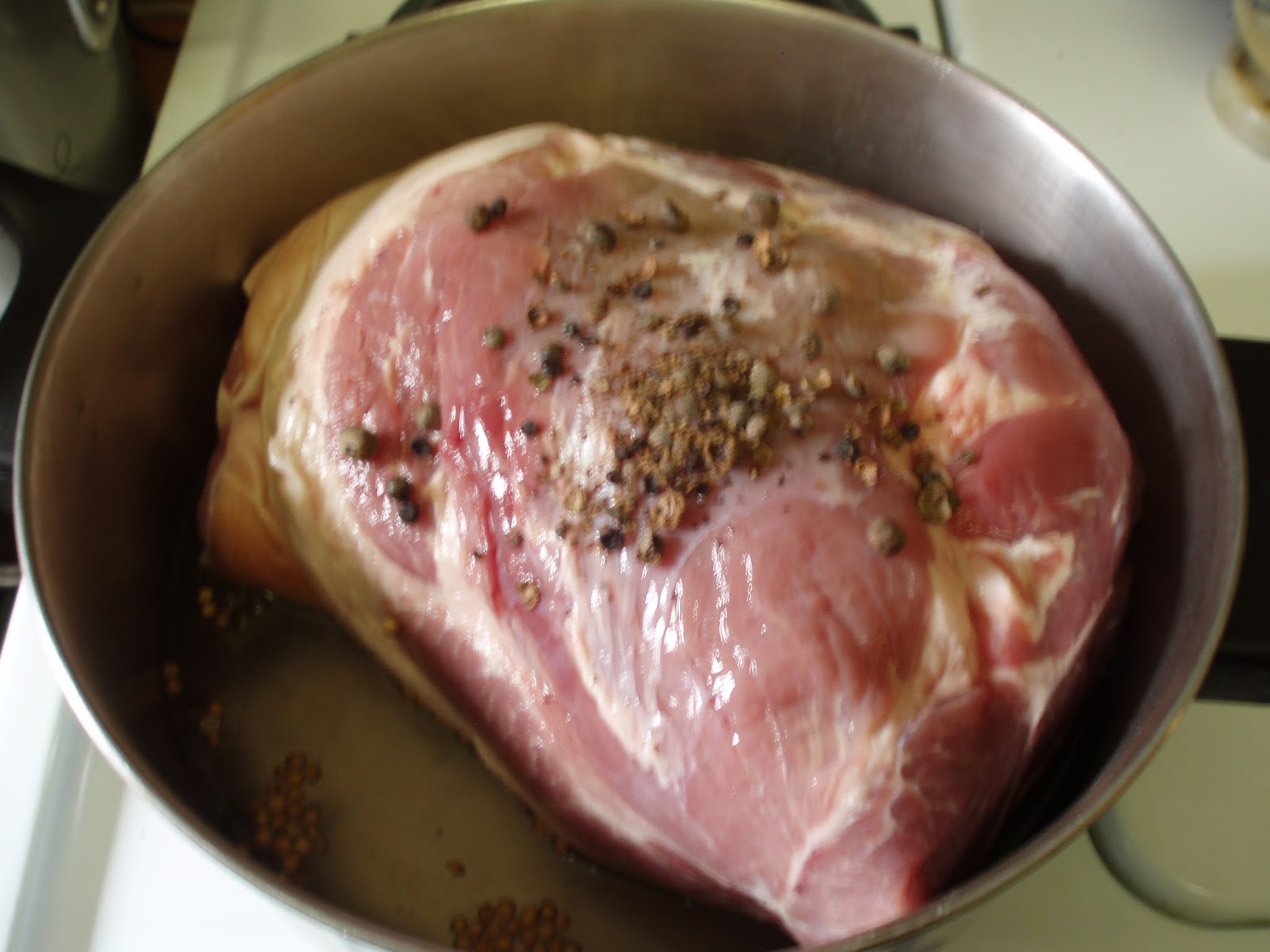 There is a big thick rind over a layer of fat along one side. If I’m simmering it, I take a very sharp knife and cut off the rind, leaving some of the fat. I’m not trying to trim it completely, at this point – just get the thick stuff off. Then I put the fat side down in the pan, and add water. I bring it to a boil, then lower to a very low simmer… and cook it 2-3 hours, depending on how large the cut is.

When the meat is fully cooked, it shreds. It is literally falling off the bone. I’ll go in with a fork and just pull off a chunk for dinner that night… then I let the rest cool in the broth.

I don’t seem to have taken a picture before I started to dismantle it. You can see, though, the awkward shape of the bone. You’re not going to get nice neat slices – but the meat is falling apart, so you wouldn’t anyway… Just keep pulling off chunks and shreds. I do use a carving knife and fork to do so – you see them in the background, but more to dissect than to slice. I also do now use them to cut away the big chunks of fat.

I shred the meat and put it in containers and zipped bags in the freezer. It is great to add to cooked greens such as the cabbage (OK, it was red, but – same concept.) It works very well with beans of all kinds. It’s a good base for semi-traditional pulled pork or barbecue. (The meat properly should be smoked, I understand, but, if that’s not an option – I’ve known people cook it this way, and then simmer the pulled meat with barbecue sauce.)  I’ll even cut the shreds a bit more and drop them into a bean soup (even a canned one… they’re handy to have on hand for a quick lunch) to give it a little more oomph. The cooking liquid is also great for cooking greens or beans… We’re not really used to using a pork base as a stock for soup, though it’s common enough in other cultures,  but it’s exactly what you want for collards, for instance.

So – an evening’s work, or an afternoon when I was home otherwise anyway – and I have several pounds of cooked meat ready for use in a wide variety of meals.