Odds and Ends, Planned and Unplanned

I live in New York City. On the East Side of Manhattan. And the United Nations General Assembly opened last  week…

This may just be of mild interest to anyone who isn’t in Manhattan, and isn’t interested in international governance and politics. The actual Opening date, however, is of intense interest to anyone in Manhattan. All these diplomats and representatives of government  from all over the world converge on New York at the same time. In  fact, for the actual Opening, we have multiple Heads of State and/or Government. And, well – they have to get around the city somehow… securely… so traffic on the East Side is a bit of a nightmare.

This is all to explain why I waited nearly an hour for a Second Avenue bus  (which normally runs every 10 minutes at that hour, after rush hour) the other day… It was a week after Opening, so the Heads of State had mostly gone home – but, it’s still busy.

I knew I was going to be home late. I did a job on the Upper East Side and then, as long as I was uptown, ran some errands that I knew were going to take time. So, I had cooked rice, and some ground beef was ready for hamburgers, and I was going to saute some kale… and we’d have a fairly easy (if unimaginative) dinner in about 15-20 minutes. (Even giving me a few minutes to change clothes and have some water…)

But – when I was still waiting for the bus at 8:00, I knew I needed something even faster and easier…  I called home, told Rich I’d be late, and  to take a container of ratatouille out of the freezer… (and make himself a burger and eat, if he got hungry before I got home… He chose not to.)

When I got home, I put a fry pan on the stove over medium heat, and broke up the beef into it. Added a small chunk of the frozen onion, and a sprinkling of frozen peppers.  Stirred all that around while the beef browned.

Once the beef was brown, I dropped in the (still partly frozen) ratatouille. I did not choose to add tomatoes… I put a cover on it, lowered the heat a bit, and went to change clothes.

Came back, stirred, sat down and asked Rich to set the table and pour water.

Did not get a picture. We were too hungry – it was late. But, you see the idea – the prepared onion, pepper, and ratatouille allowed me to fix a full meal in hardly any time at all, with hardly any effort.

This wasn’t really a whole post – it was too simple – but the other day, I made a salad for lunch. I mixed lettuce and arugula, added my prechopped vegetables (which included a beautiful ripe red pepper,) some feta cheese, and a simple oil and vinegar dressing. 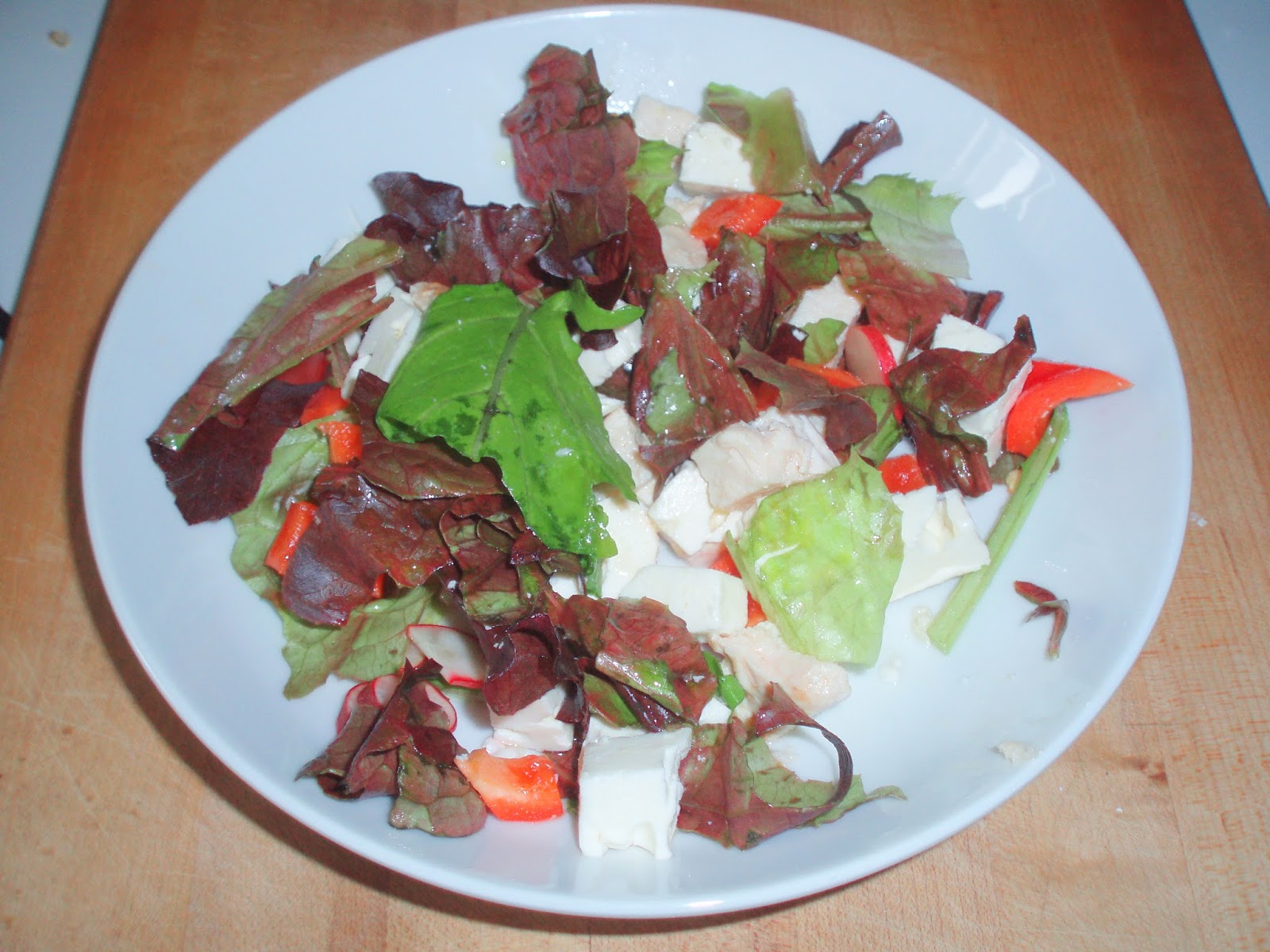 It was the perfect flavor explosion. It hit all the bases – sweet red pepper, salty feta, bitter arugula, and sour vinegar.

It was so good I posted on my personal Facebook page – and I don’t do that – and then ran to take this picture. (Yes – I’ve already eaten about half of it…)

Sometimes, you just hit it right.