As I’ve said before, one reason I keep convenient foods on hand is so that I can always put a meal together with very little time or effort.

I have several situations driving this need. For one thing, I have chronic migraine. They’re mild, as migraines go, but I never know either when I’m going to get one, or how disabling it will be. I can have a lovely meal planned out, and then find that I’m not able to do more than throw a few ingredients together – or even that I’m just going to Lie Down Now, and tell Rich to Make Dinner Happen. I need a backup plan for those nights.

On a happier note, I sometimes need something after a day at work. I freelance, and, while some of my gigs are by the hour, some are by the job. I go in, and do the set job, however long it takes. Usually it is pretty predictable, but sometimes I’ll hit a snag, and get home an hour or two later than I had expected. Then I need something fast – I may have been planning to start the brown rice, and chop the onion, and cut the chicken, but now I want something on the table in 15 minutes. (And, of course – that is everyday reality for many people. I’m in a position to serve a late dinner – most schedules don’t allow that.) 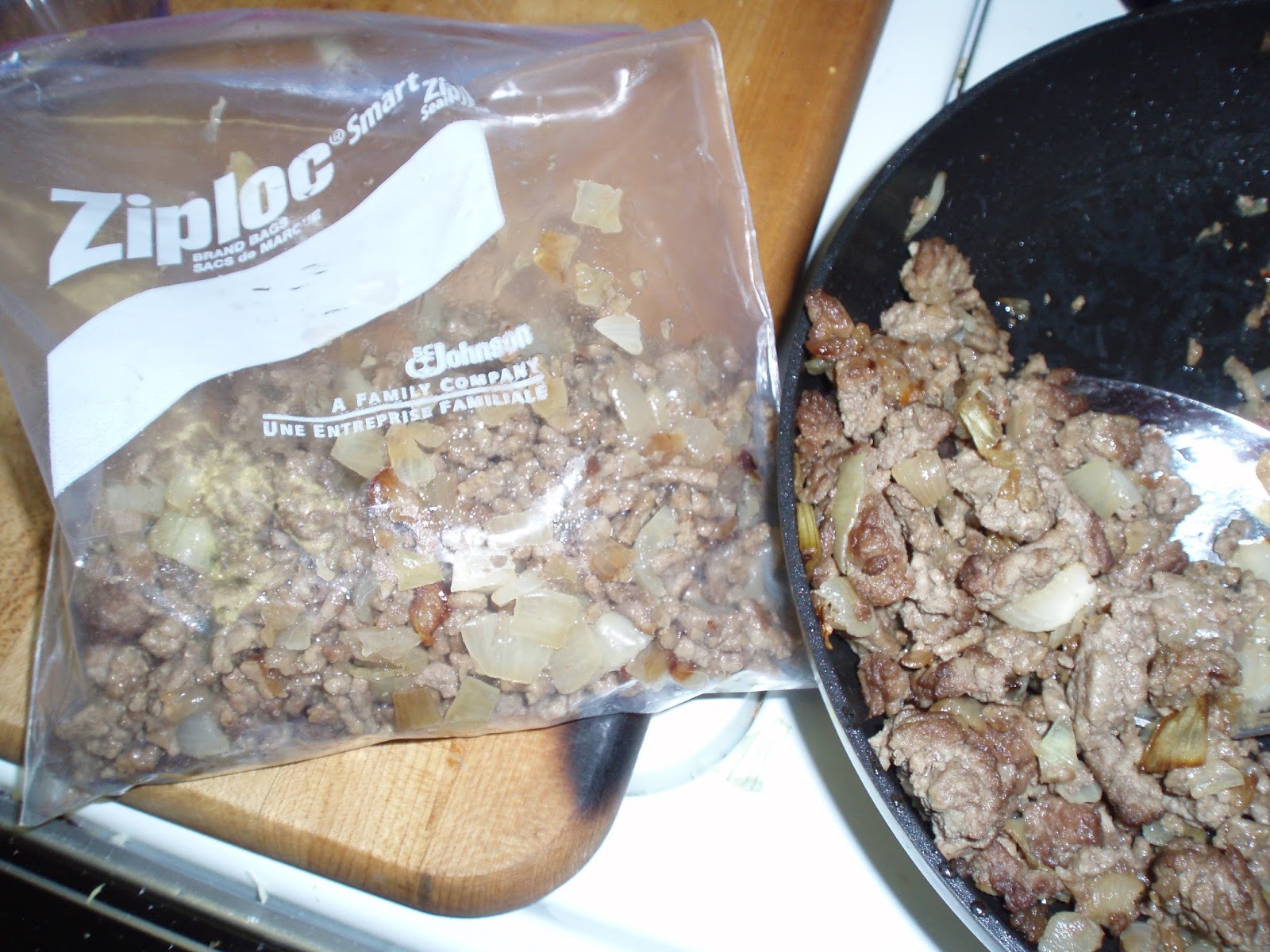 Enter browned and cooked ground meat – with or without onion already added. I buy ground meat in so-called Family Packs, which save me money. I’ll use some right away, and freeze some raw for later use – but I always brown a good chunk of it right away, and then freeze the precooked crumbles. Then Rich can break off a chunk and put it in a commercial pasta sauce, over pasta, with frozen vegetables (either commercial or leftovers we freeze) and I don’t have to do anything.

Or, when I get home late, I can just saute some vegetables, add this, serve it over heated commercial polenta (a commercial convenience food I keep on hand, for this reason – it’s still a whole food, it sits in the pantry, and it’s ready to go in a couple of minutes. Sure, I can make polenta myself – and I do, when it’s a planned meal with plenty of time to cook – but this is to avoid takeout…)

The cooked meat is also useful if I am making a bean dish, that I feel needs just a little boost in protein. This way, I don’t have to use another pan, take time for another step – I just break off a bit, and let it heat right in the simmering beans. Another time, I might add hard cooked eggs, or cheese… I like to have choices. 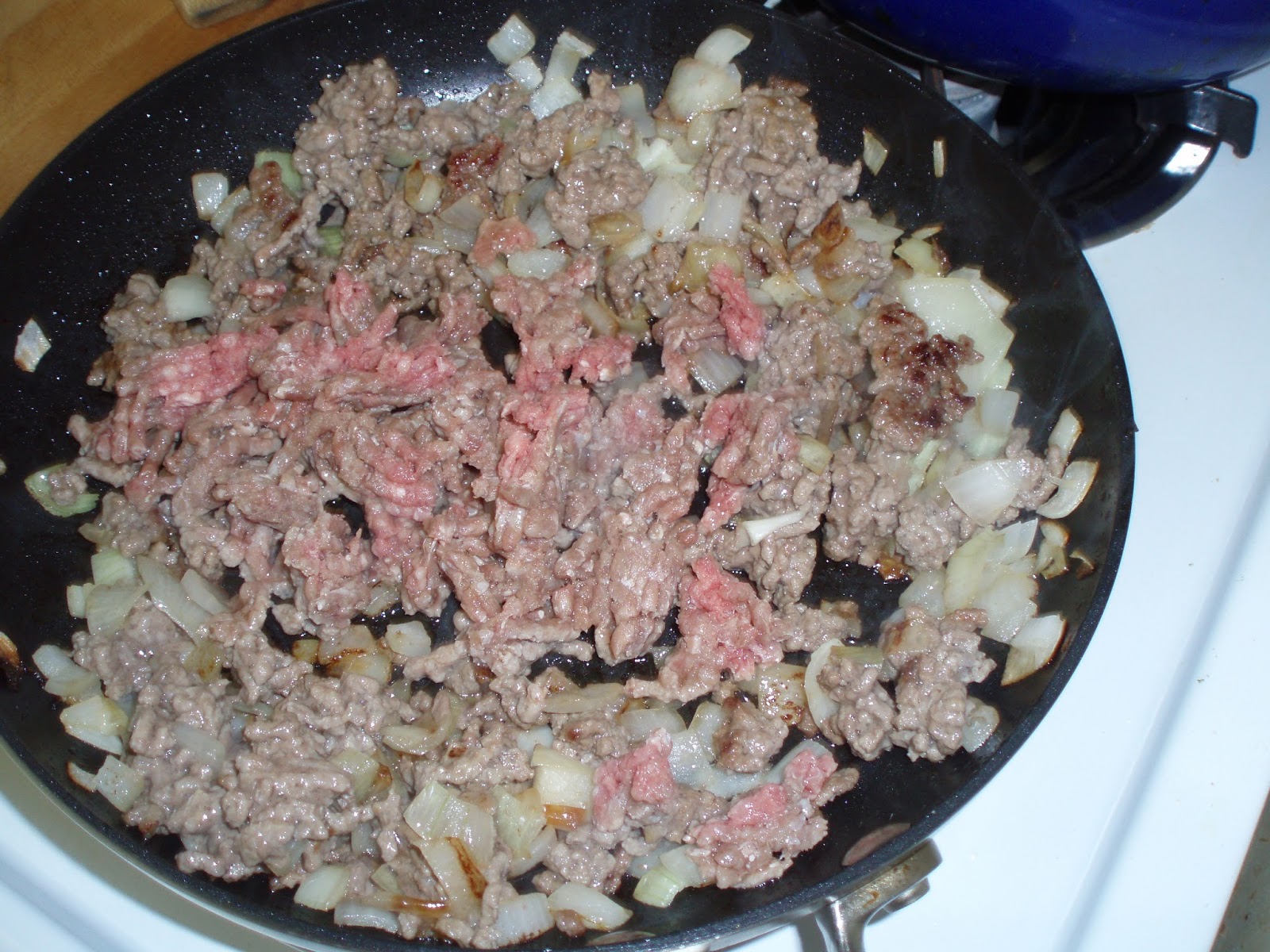 I usually (but not always) saute some onions just slightly, first. Most dishes I use this in will benefit from a little onion – but, if I don’t have them handy, or I’m in a rush, I can leave out this step.  I just cook them until they soften a little, as I don’t want them overcooked.

Then I break up the meat. Now, you may notice, I keep saying “meat” – not just “beef” or “hamburger.” I often mix two kinds of  meat, here – half beef and half turkey or chicken, for example. The mixture is lower in fat than beef alone, but more juicy and flavorful than turkey alone. (Turkey is also usually less expensive – I’m all for stretching budgets…) As it happens, though, these pictures are just of beef. 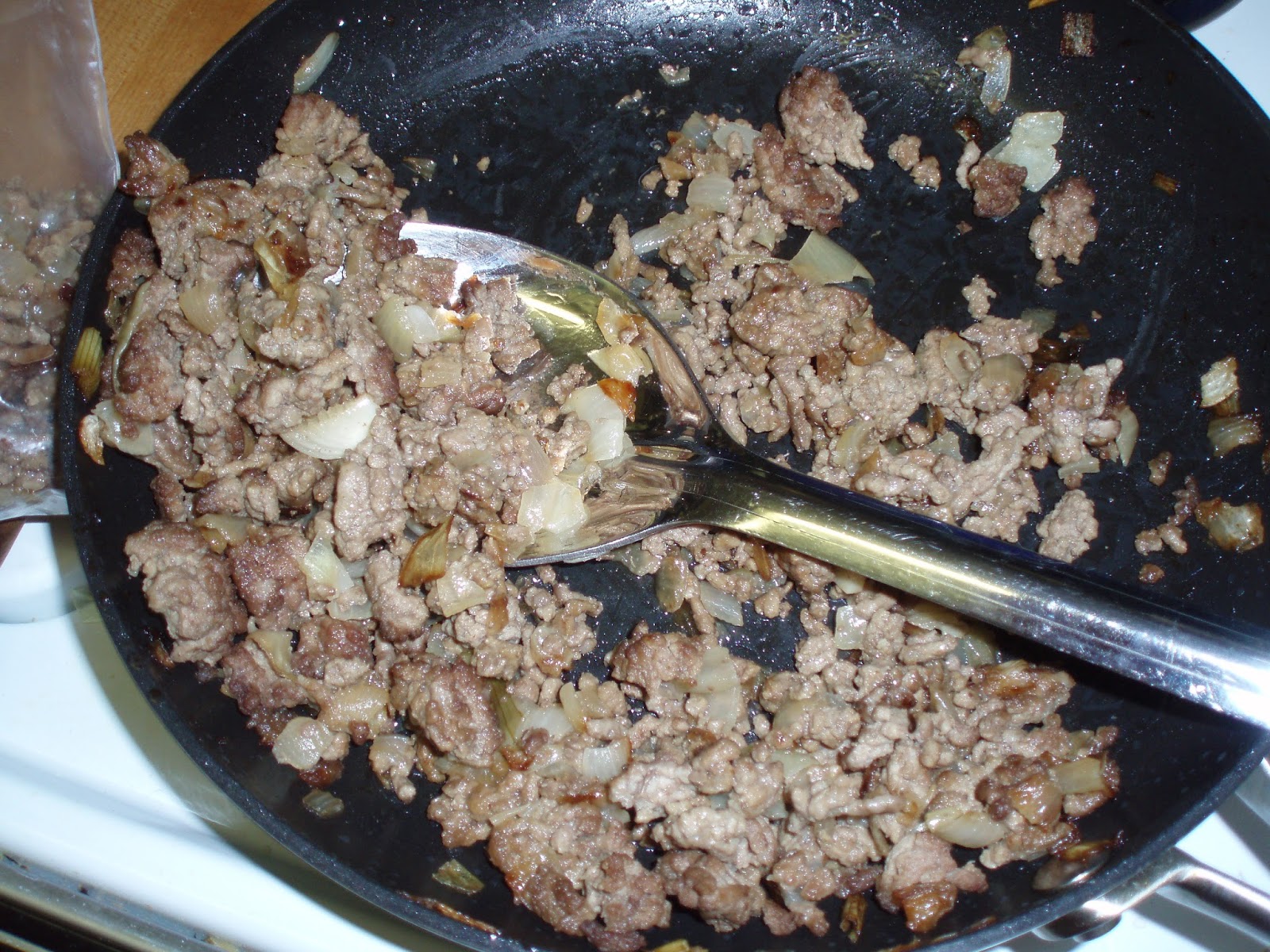 The pan is already hot from sauteing the onions. If I didn’t cook onions, I heat the pan, over medium heat, before adding the meat, so it will brown nicely. I break the meat up in little bits, and sort of sprinkle them over the pan, to maximize surface. I let them sit a while, and then stir occasionally, until it is brown.

I find a lot of ground meat these days has a surprising amount of water in it. I hadn’t cooked much meat for many years (and when I did, I wasn’t cooking hamburgers) so I really noticed the difference when I started again. So, as the meat cooks, you should be getting some grease cooking out, but you may also get liquid. I let it cook off, as much as I can (and I try to find sources that don’t make me pay for water…) When the meat is brown and cooked, though, if there is much liquid in the pan (fat or water or a mixture) I pour it off.

I have seen suggestions that you then rinse the crumbles under hot water, to remove as much fat as possible. That’s also going to remove a great deal of the flavor, so I would not recommend it under normal circumstances. I mention it, though, as it might be useful for someone who needs to be on a very low fat and cholesterol diet… Mixing the meats and rinsing might be an occasional alternative to avoiding beef altogether. 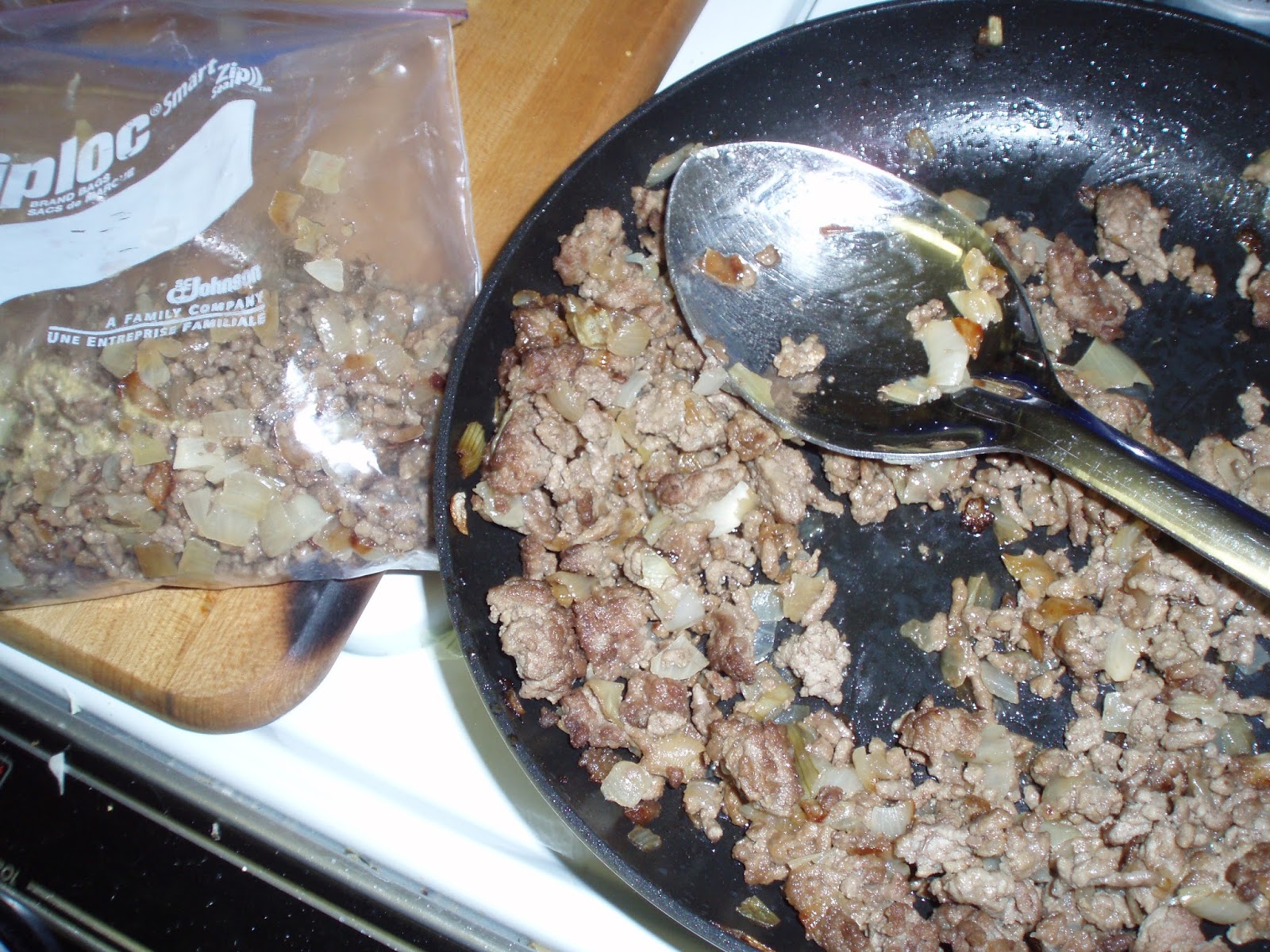 Then I let the meat cool. After it is cooled, I bag it in zipper freezer bags. I press the air out, then flatten the bags, and lay them on their sides to freeze, so that I end up with a thinnish slab of frozen food. I find that I can break off pieces, that way, and use the amount I want at any one time.
Plain looking for a lifesaver, isn’t it? But a couple of those bags in the freezer give me a base for a wide variety of quick, easy meals, as needed. 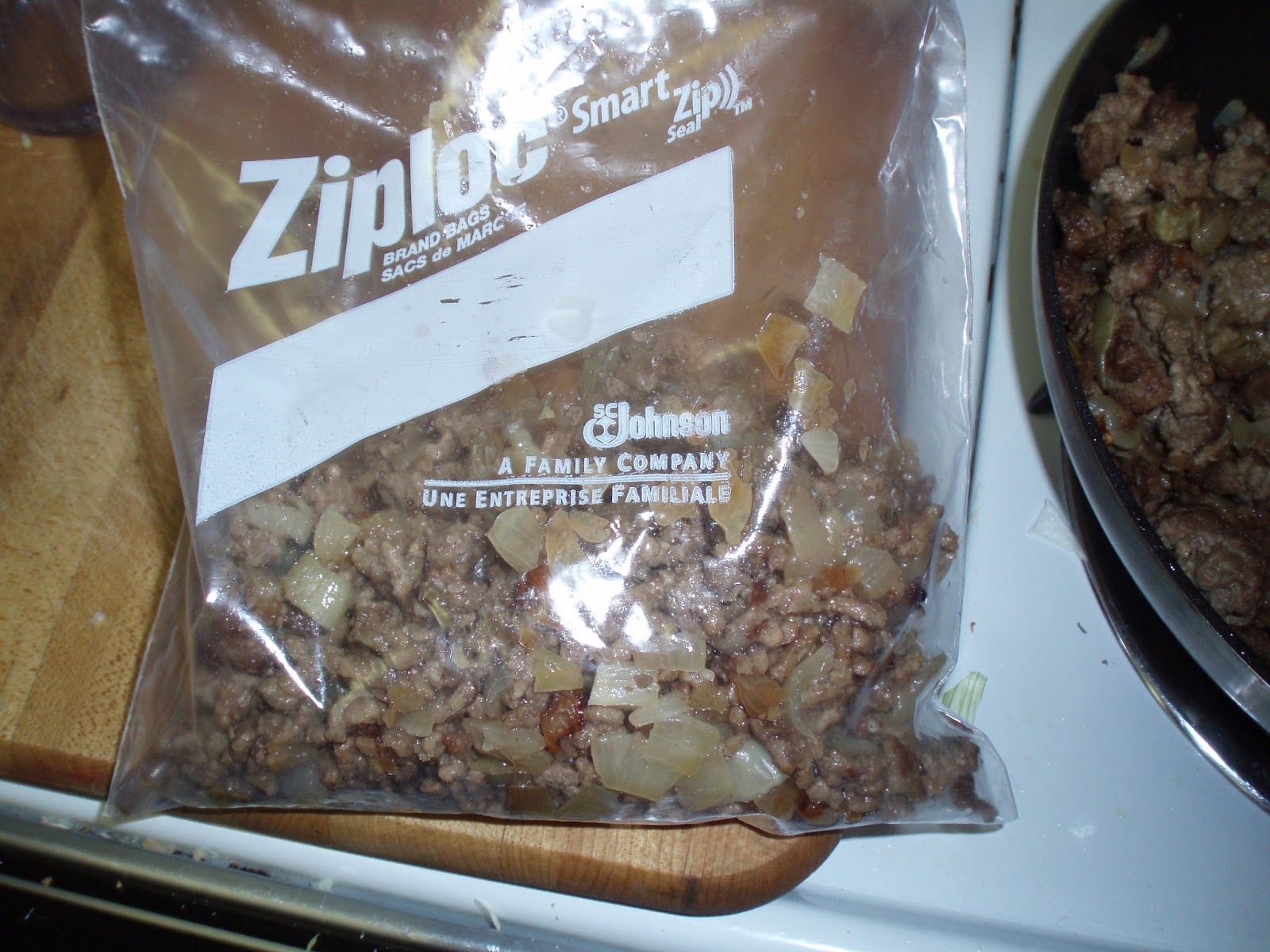