It’s August in New York City. It’s hot, and humid, and sticky, and miserable, and… 60 degrees??

Well, every few years, in the middle of our proverbial dog days of Summer, we get just a few days of Fall weather, just to  tease us, before the weather returns to the usual oven. It’s a wonderful respite, and really helps for the rest of the summer, too, as the concrete and brick cools off and stops radiating heat at us. You can’t count on it, it won’t last, but… it is lovely…

Well, we had a few days like that last week. And I had a container of chicken stock in the freezer, and some cooked chicken,  and some odds and ends of both raw and cooked vegetables – and I thought a bowl of a light soup would be a nice addition to lunch.

I looked in the fridge, and assembled my ingredients. Half an onion, half a celery stalk, half a carrot (remember, I’m cooking for two. Sometimes a whole onion or carrot is just too much…) Chicken, and chicken stock. Leftover greens, frozen in cubes. 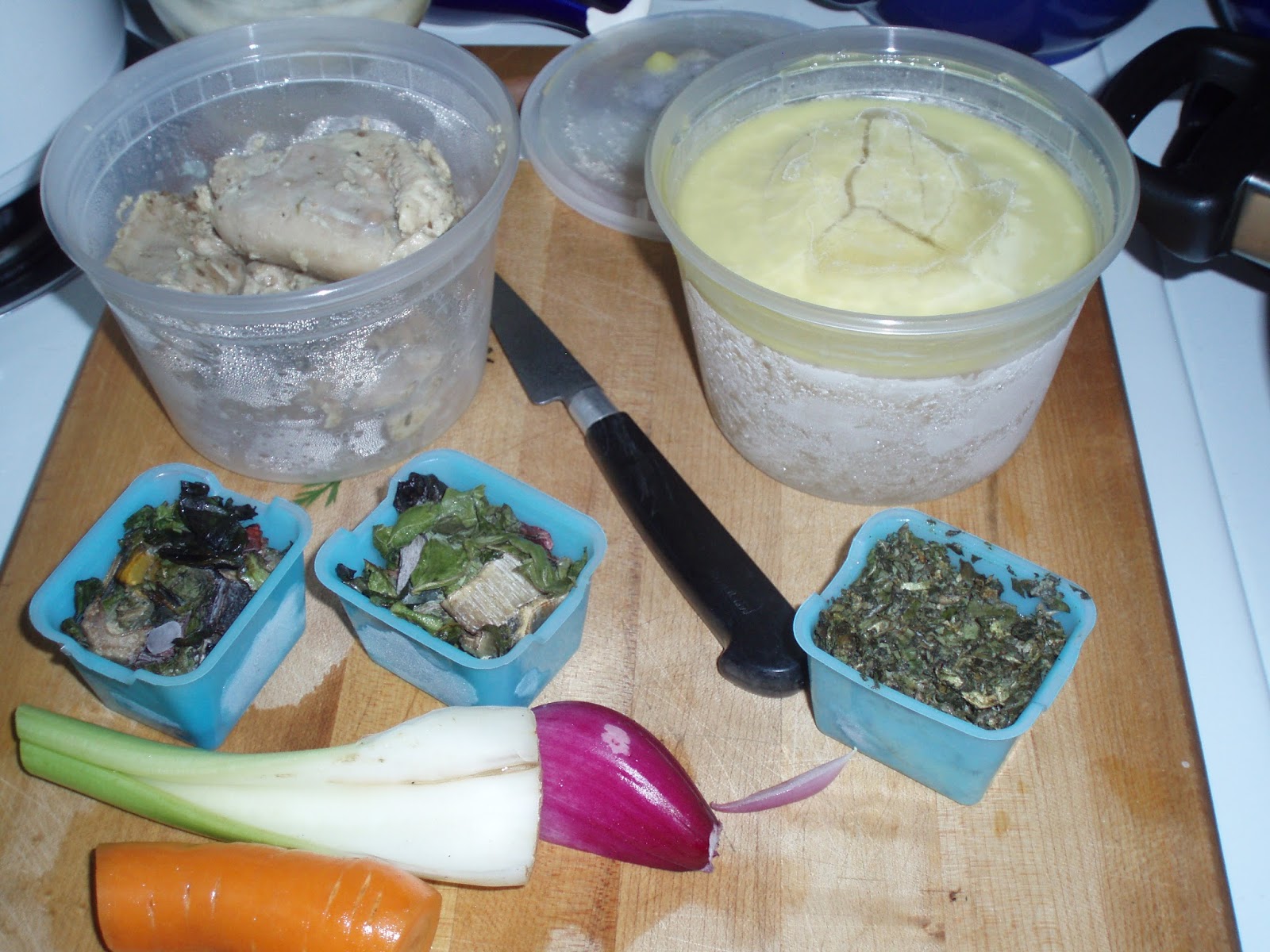 What? Well… with two of us, a whole bunch of kale or chard is usually too much for one meal, especially as I often serve other vegetables as well. So we freeze the leftovers. My favorite trick, actually, is to freeze them in muffin pans – that gives me little half cup muffins of greens… little manageable chunks. This time, the freezer had been full, though, and we really had some tiny bits,  so Rich (he cleans up, since I cook) put them away in little ice cube holders. (They were my grandmother’s – they’re useful for all sorts of odd little bits of things… but if you don’t have them there are many small containers you can use.) I usually pop them out into a zippered freezer bag the next day, and assemble a bag of muffins and cubes of various cooked greens. They’re useful when we carry a meal, they’re my go to for  Anne Can’t Cook nights, and they’re a great size to toss into other dishes.

So, anyway… I got everything together, and put a pot over heat. The chicken fat (there wasn’t much) had risen to the top of the stock. I used a spoon to scrape off some of it, and put it in the pan to saute the vegetables. You can scrape all of it off, if you want, and, if there had been a lot of it, I’d have discarded some, but a lot of the flavor is in that fat. It makes more sense to me to just use some of it, instead of adding oil. If I were using packaged stock, which is usually lower in fat, I’d just grease the pan with olive oil.

I chopped the onion, celery, and carrot (Aromatics,  remember?) and put them in the pot. Let them saute just a little, while I chopped the frozen greens. This is one feature I really like about the cubes and muffins rather than one thick chunk – I find them easy to chop more finely, which I want if I add them to soup or a sauce. Let’s avoid long strings of kale dripping out of spoons, shall we? They get messy… Then I added the greens to the pot. 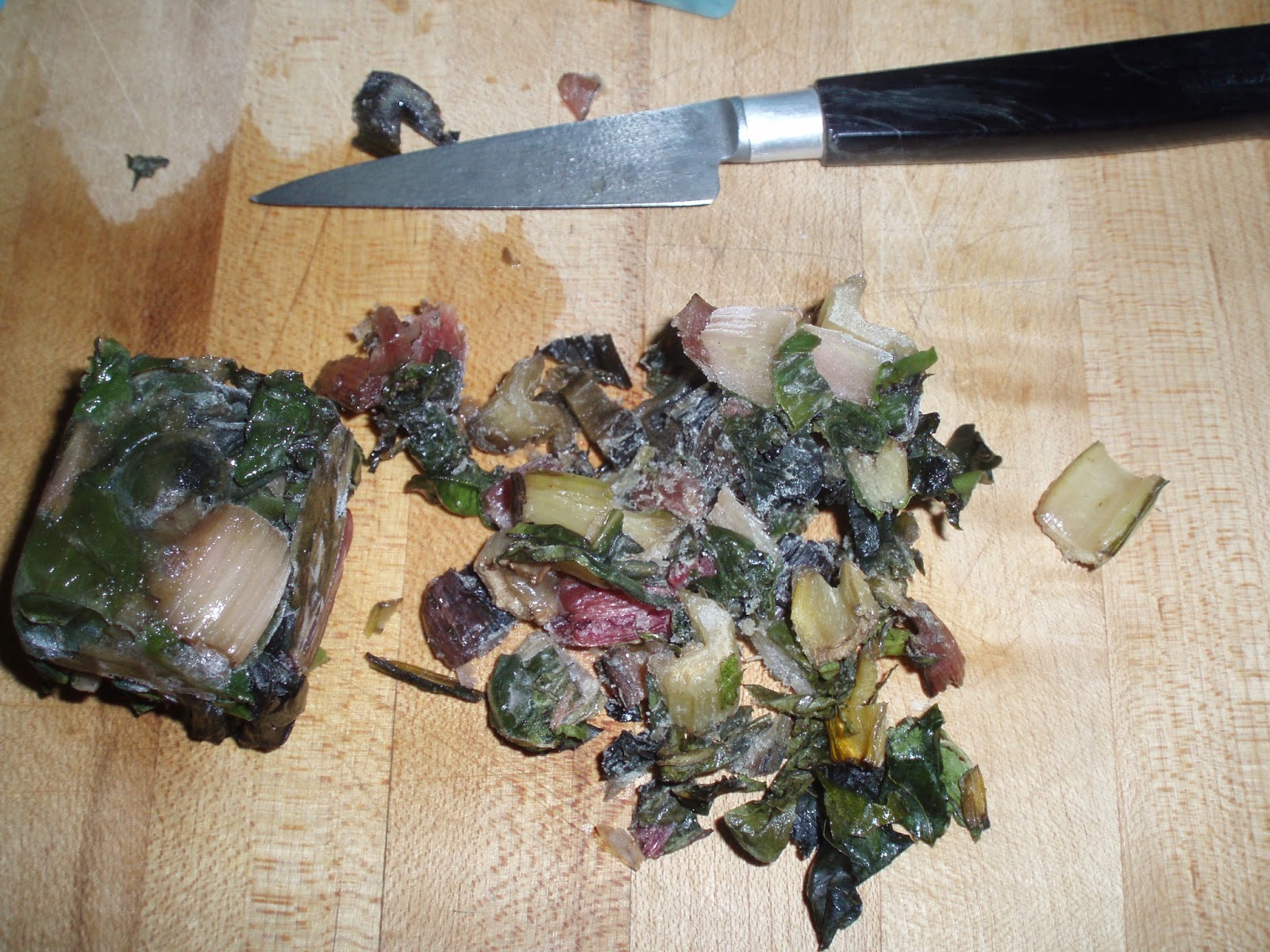 Anyhow, when the aromatics had softened a little I popped in the chunk of frozen stock. As it was thawing, I knew I would need more than a pint of broth, and I wanted it to have plenty of flavor, so I crumbled and threw in some dried shiitake mushrooms. We’re lucky enough to be able to shop in Japanese stores where they are inexpensive, we love mushrooms, and they are very useful for quickly adding some flavor to a broth or sauce. Soup base or seasonings would also be an option here (or just a larger container of stock, if you have one…) Since I was using mushrooms, and not a seasoned soup base, I also added a dash of salt. 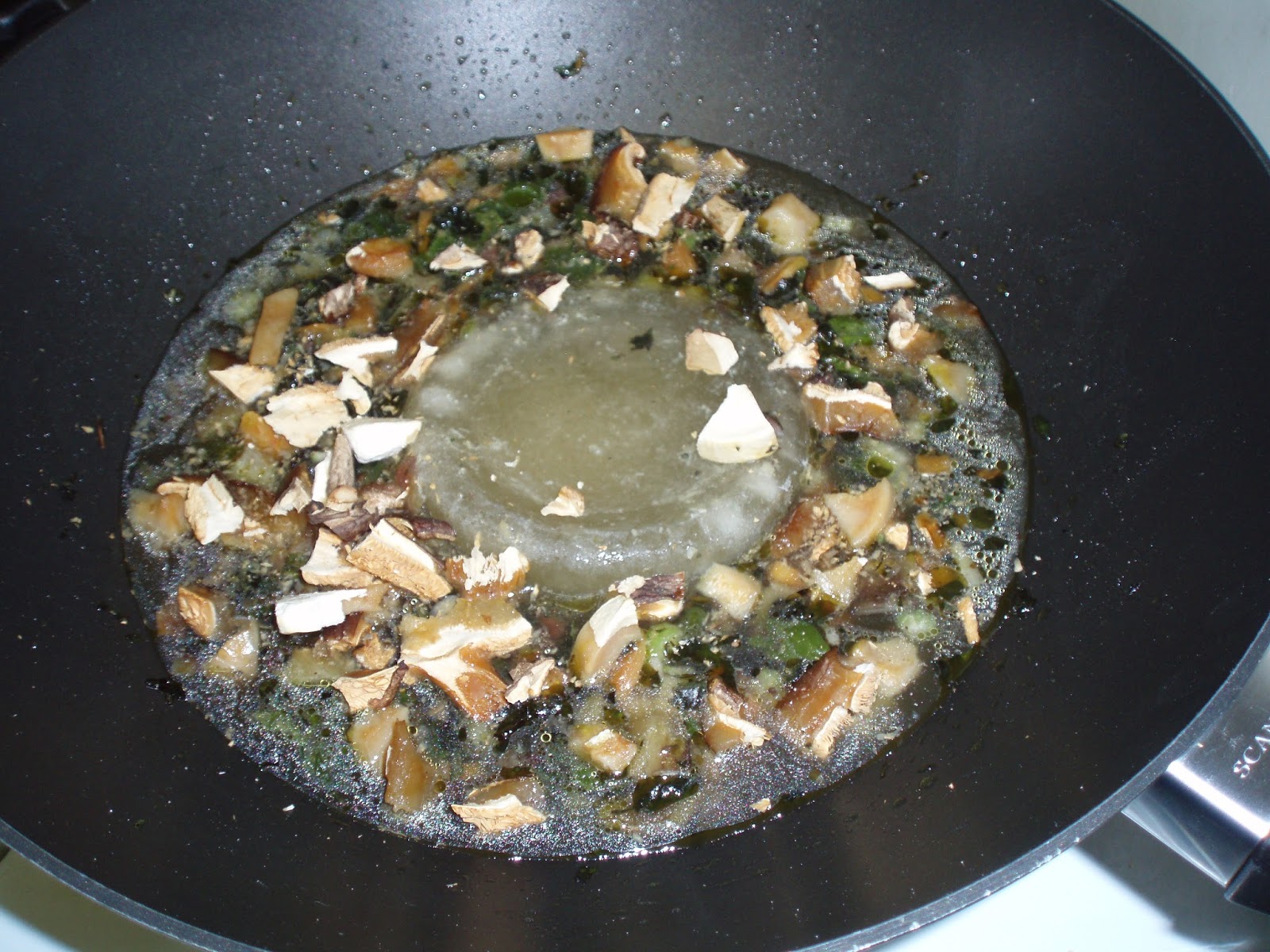 While the frozen broth continued to melt, I chopped a piece of the cooked chicken. The soup wasn’t going to be a whole meal, so I just put in a little – for flavor, as much as anything else. I added it, then, when the broth was mostly melted, added about a cup of water. 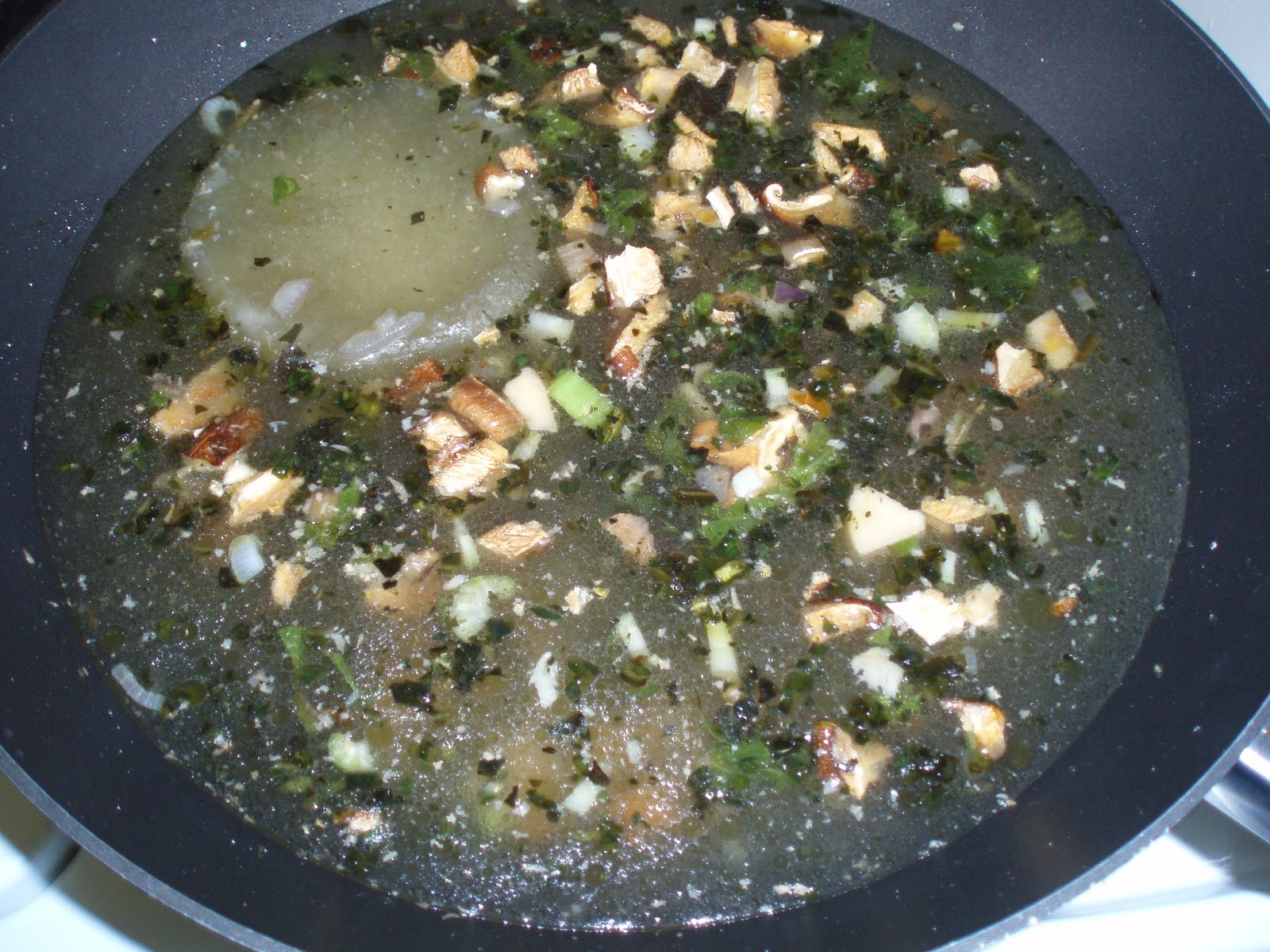 Then I just put on a lid, left it on medium heat until it all simmered about 5 to 10 minutes and all the vegetables were tender, and called it soup. 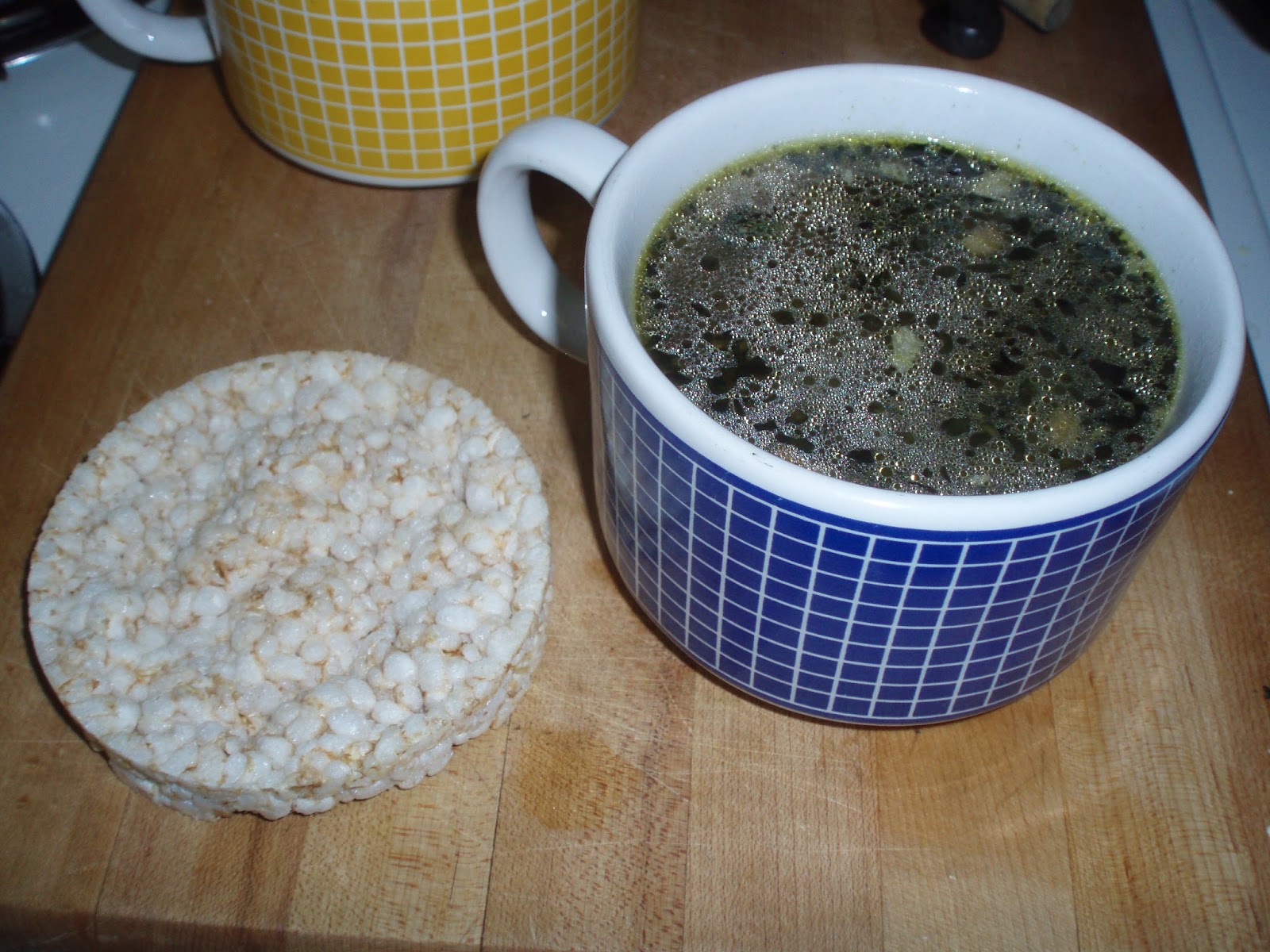 This kind of soup is a great way to fill out a meal. I use it as part of lunch, as I did here – but it is also a way to get a bit more vegetable, or meat, or… whatever… into a meal that is light on that food group. (I didn’t add a grain or bean, this time – but that’s easy…)  Or – there is *almost* but not *quite* enough of that casserole left for dinner… or “Of course you can come over!” Or, most often, probably, just that you want to Do Something with those bits and pieces without it feeling like leftovers.

Now, the point of this is to let you cook without a recipe – but I know that, for beginners, it can be easier to have a written out recipe. So I’m adding that, here – and I’m doubling it, instead of actually *calling for* those half pieces of vegetables… but, remember – that’s what you can  use…

Grease the pan with either the fat from homemade stock, or olive oil. Saute the aromatics for a few minutes, until they start to soften.

Chop the greens finely, add them to the pot.

Add stock, and mushrooms or soup base (breaking the mushrooms up into small pieces.) Add another 2 cups of water.

Chop chicken into small chunks, and add to pot.

Let simmer about 10 minutes, until all vegetables are softened and flavor is blended.

Browned meat with Beans (and no time…)
In Search Of – Creamy Salad Dressing!